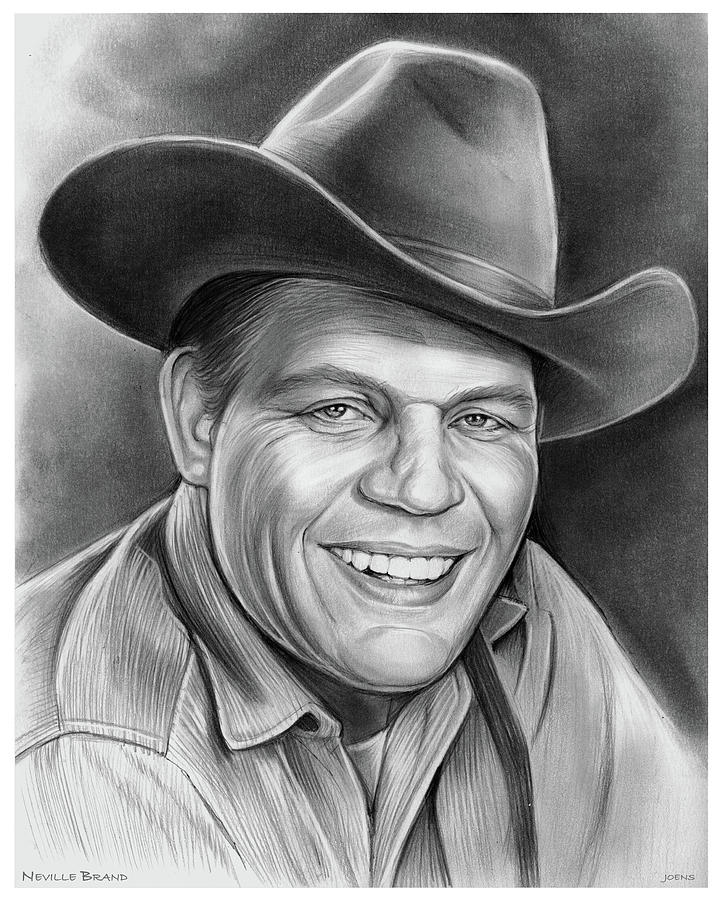 Neville Brand
Sketch of the Day for Sunday, November 5, 2017

Neville Brand was born in Griswold, Iowa, one of seven children of Leo Thomas Brand (June 24, 1892–April 18, 1985) and the former Helen Louise Davis (August 4, 1900–October 23, 1991). His father had worked as an electrician and bridge-building ironworker in Detroit. Neville was raised in Kewanee, Illinois, where he attended high school. After his schooling he helped support the family, employed as a soda jerk, waiter, and shoe salesman in Kewanee.

He entered the Illinois Army National Guard on October 23, 1939, as a private in Company F, 129th Infantry Regiment. He was enlisted in the United States Army as Corporal Neville L. Brand, infantryman on March 5, 1941.
World War II

He trained at Fort Carson and served in World War II, seeing action with B company, 331st Infantry Regiment of the 83rd Infantry Division (Thunderbolt Division) in the Ardennes, Rhineland and Central European campaigns. Brand, a sergeant and platoon leader, was wounded in action along the Weser River on April 7, 1945. His upper right arm was hit by a bullet, and he nearly bled to death.

Brand was awarded the Silver Star, the third-highest decoration for valor in the U.S. Military, for gallantry in combat. His other awards and decorations were the Purple Heart, the Good Conduct Medal, the American Defense Service Medal, the European-African-Middle Eastern Campaign Medal with three Battle Stars, one Overseas Service Bar, one Service Stripe and the Combat Infantryman Badge. In a 1966 interview he explained the Silver Star, stating that withering fire from German machine guns in a hunting lodge kept him and his unit pinned down. “I must have flipped my lid,” he said. “I decided to go into that lodge.” He was discharged from service in October 1945.

He worked on a 1946 U.S. Army Signal Corps film with Charlton Heston and next settled in Greenwich Village and enrolled at the American Theatre Wing, working off-Broadway, including Jean-Paul Sartre’s The Victors. He also attended the Geller Drama School in Los Angeles on the G.I. Bill.
Acting career

Brand started his big-screen career in D.O.A. (1950) as a henchman named Chester. His hulking physique, rough-hewn, craggy-faced looks and gravelly voice lead to him largely playing gangsters, Western outlaws and other screen "heavies", cops and other tough-guy roles throughout his career. He became well known as a villain when he killed the character played by Elvis Presley in Love Me Tender. He had the distinction of being the first actor to portray outlaw Butch Cassidy, in the film Three Outlaws, opposite Alan Hale Jr. as the Sundance Kid. Though not the big-budget romp that the later Paul Newman–Robert Redford film was, both Brand’s Cassidy and Hale’s Kid were played as likable outlaws, a rare change from Brand’s typecasting as a murderous psycho.

However, Brand was occasionally cast against type, playing a romantic lead in the movie Return from the Sea with Jan Sterling and a heartwarming character who was brain damaged and misunderstood in an episode of the television series Daniel Boone. He played Hoss Cartwright's (Dan Blocker) Swedish uncle Gunnar Borgstrom on Bonanza in the episode "The Last Viking". He also played U.S. Navy Lieutenant Kaminsky, ignored as he tried to warn his commander of the opening skirmish in Tora! Tora! Tora!.

Of the hundreds of roles he played, he is probably most well known as Al Capone on the television series The Untouchables and again in the movie The George Raft Story. The characterization -- including in the television series pilot episode an odd broken-English pseudo-Italian accent which the American-born Capone did not have in real life - caused an outcry from the Italian American community over stereotypes. He also portrayed a prison guard of Birdman of Alcatraz and as the antagonistic and untrusting, yet dedicated POW, Duke, in Stalag 17. In 1980, Brand appeared as Major Marvin Groper in The Ninth Configuration, written and directed by The Exorcist author William Peter Blatty.

Brand was also known for his roles in Westerns; he appeared in numerous Westerns throughout the 1950s, 1960s and 1970s, including The Tin Star with Henry Fonda and Anthony Perkins, The Desperados with Jack Palance, and The Deadly Trackers with Richard Harris. On television, he appeared in The Virginian and then went on to star as Reese Bennet on the series Laredo. Brand co-starred with George Takei in "The Encounter", an episode of the original Twilight Zone series. Brand, a genuine decorated veteran, portrays a phony war hero, a coward who obtained his prize trophy (a Japanese soldier’s sword) by murdering a Japanese officer after he had surrendered.