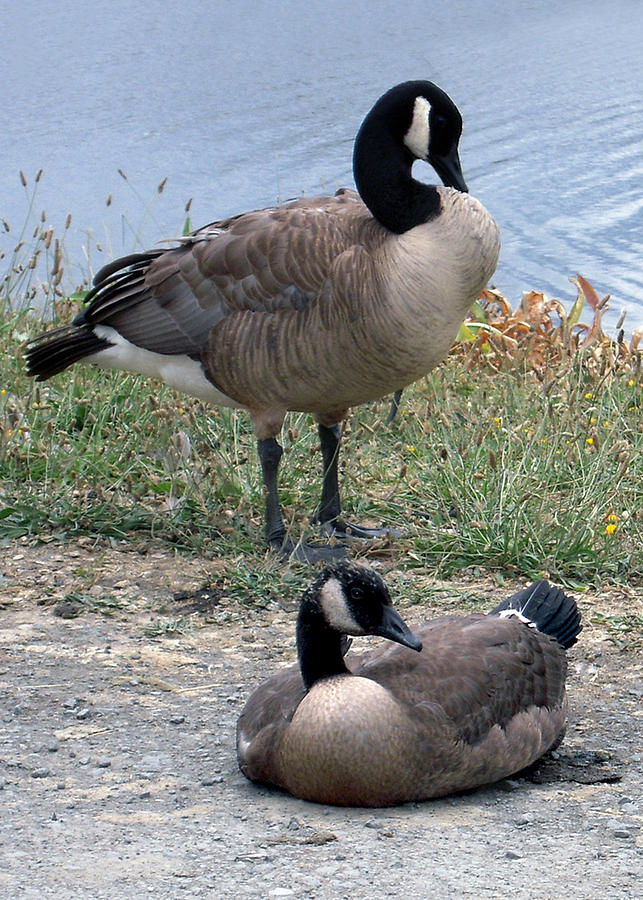 The Canada goose (Branta canadensis) is a goose with a black head and neck, white patches on the face, and a brown body. Native to arctic and temperate regions of North America, it also occasionally migrates to northern Europe, and has been introduced to Britain, New Zealand, and other temperate regions.

he black head and neck with a white "chinstrap" distinguish the Canada goose from all other goose species, with the exception of the cackling goose and barnacle goose, but the latter has a black breast, and also grey, rather than brownish, body plumage.[7]
There are seven subspecies of this bird, of widely varying sizes and plumage details, but all are recognizable as Canada geese. Some of the smaller races can be hard to distinguish from the cackling goose, which slightly overlap in mass. However, most subspecies of the cackling goose (exclusive of Richardson's cackling goose, B. hutchinsii hutchinsii) are considerably smaller. The smallest cackling goose, B. h. minima, is scarcely larger than a mallard. In addition to the size difference, cackling geese also have a shorter neck and smaller bill, which can be useful when small Canada geese co-mingle with relatively large cackling geese. Of the "true geese" (i.e. the genera Anser or Branta), the Canada Goose is on average the largest living species, although some other species that are geese in name, if not of close relation to these genera, are on average heavier such as the spur-winged goose and Cape Barren goose. Canada geese range from 75 to 110 cm (30 to 43 in) in length and has a 127�185 cm (50�73 in) wingspan.[8] The male goose usually weighs 2.6�6.5 kg (5.7�14.3 lb), averaging amongst all subspecies 3.9 kg (8.6 lb), and can be very aggressive in defending territory. The female looks virtually identical but is slightly lighter at 2.4�5.5 kg (5.3�12.1 lb), averaging amongst all subspecies 3.6 kg (7.9 lb), and generally 10% smaller in linear dimensions than the male counterparts.[9] The female also possesses a different, and less sonorous, honk than the male. Among standard measurements, the wing chord can range from 39 to 55 cm (15 to 22 in), the tarsus can range from 6.9 to 10.6 cm (2.7 to 4.2 in) and the bill can range from 4.1 to 6.8 cm (1.6 to 2.7 in). The largest subspecies is the B. c. maxima, or the "giant Canada goose", and the smallest (with the separation of the cackling goose group) is B. c. parvipes, or the "lesser Canada goose".[10] An exceptionally large male of race B. c. maxima, which rarely exceed 8 kg (18 lb), weighed 10.9 kg (24 lb) and had a wingspan of 2.24 m (7.3 ft). This specimen is the largest wild goose ever recorded of any species.[11]
Canada goose is protected in Canada under the Migratory Birds Convention Act, 1994.[12] Commercial transaction (such as buying or trading) are prohibited. The possession, hunting, and interfering with the activity of the animals are restricted by law.[13] Environment Canada's Wildlife Enforcement Officers have the responsibility for enforcing the legislation.
Distribution and habitat[edit]

Flock in flight
This species is native to North America. It breeds in Canada and the northern United States in a variety of habitats. The Great Lakes region maintains a very large population of Canada geese. Canada geese occur year-round in the southern part of their breeding range, including most of the eastern seaboard and the Pacific coast. Between California and South Carolina in the southern United States and northern Mexico, Canada geese are primarily present as migrants from further north during the winter.[14]
By the early 20th century, over-hunting and loss of habitat in the late 19th century and early 20th century had resulted in a serious decline in the numbers of this bird in its native range. The giant Canada goose subspecies was believed to be extinct in the 1950s until, in 1962, a small flock was discovered wintering in Rochester, Minnesota, by Harold Hanson of the Illinois Natural History Survey.[15] In 1964, the Northern Prairie Wildlife Research Center was built near Jamestown. Its first director, Harvey K. Nelson, talked Forrest Lee into leaving Minnesota. Forrest Lee would head the center�s Canada goose production and restoration program. Forrest soon had 64 pens with 64 breeding pairs of screened, high-quality birds. The project involved private, state and federal resources and relied on the expertise and cooperation of many individuals. By the end of 1981, more than 6,000 giant Canada geese had been released at 83 sites in 26 counties in North Dakota.[16] With improved game laws and habitat recreation and preservation programs, their populations have recovered in most of their range, although some local populations, especially of the subspecies occidentalis, may still be declining.[citation needed]
In recent years, Canada goose populations in some areas have grown substantially, so much so that many consider them pests for their droppings, bacteria in their droppings, noise, and confrontational behavior. This problem is partially due to the removal of natural predators and an abundance of safe, man-made bodies of water near food sources, such as those found on golf courses, in public parks and beaches, and in planned communities. Due in part to the interbreeding of various migratory subspecies with the introduced non-migratory Giant subspecies, Canada geese are frequently a year-around feature of such urban environments.[17]
Contrary to its normal migration routine, large flocks of Canada geese have established permanent residence in Esquimalt, British Columbia, on Chesapeake Bay, in Virginia's James River regions, and in the Triangle area of North Carolina (Raleigh, Durham, Chapel Hill), and nearby Hillsborough. Some Canada geese have taken up permanent residence as far south as Florida, in places such as retention ponds in apartment complexes. Large resident populations of Canada geese are also present in much of the San Francisco Bay Area in Northern California.

Beautiful, Michele! Congratulations, your wonderful image has been featured on "Fuzzy, Warm and Soft"!

Thank you, Nancy! Yes, this is a photo and I have barely done anything to it, just cropped and adjusted exposure.

Such a great capture..I enjoy it very much!

Thank you! Sometimes those geese actually pose..I was certainly lucky!