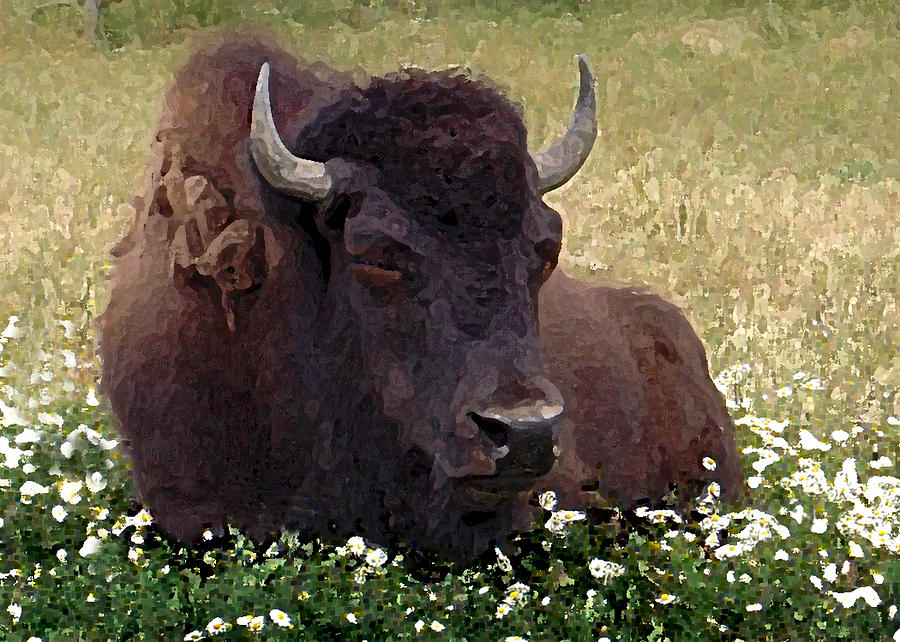 Resting Bison - Michele Avanti
Original photograph was taken at Wildlife Safari in Winston, Oregon. It was then digitally redesigned to change color, exposure and highlights, and then I painted it on bristol board.

The American bison (Bison bison), also commonly known as the American buffalo, is a North American species of bison that once roamed the grasslands of North America in massive herds, became nearly extinct by a combination of commercial hunting and slaughter in the 19th century and introduction of bovine diseases from domestic cattle, and has made a recent resurgence largely restricted to a few national parks and reserves. Their historical range roughly comprised a triangle between the Great Bear Lake in Canada's far northwest, south to the Mexican states of Durango and Nuevo Le�n, and east to the Atlantic Seaboard of the United States (nearly to the Atlantic tidewater in some areas) from New York to Georgia and per some sources down to Florida.

Two subspecies or ecotypes have been described: the plains bison (Bison bison bison), smaller in size and with a more rounded hump, and the wood bison (Bison bison athabascae) the larger of the two and having a taller, square hump. Furthermore, it has been suggested that the plains bison consists of a northern (Bison bison montanae) and a southern subspecies, bringing the total to three. However, this is generally not supported. The wood bison is one of the largest wild species of bovid in the world, surpassed by only the Asian gaur and wild water buffalo. It is the largest extant land animal in the Americas.

Calf
Bison are herbivores, grazing on the grasses and sedges of the North American prairies. Their daily schedule involves two-hour periods of grazing, resting and cud chewing, then moving to a new location to graze again. Bison mate in August and September; gestation is 285 days. A single reddish-brown calf nurses until the next calf is born. If the cow is not pregnant, a calf will nurse for 18 months. At three years of age, bison cows are mature enough to produce a calf. Bison bulls of that age may try to mate with cows, but if more mature bulls are present, they may not be able to compete until they reach five years of age. Bison have a life expectancy of approximately 15 years in the wild and up to 25 years in captivity.
For the first two months of life, calves are lighter in color than mature bison. One very rare condition is the white buffalo, in which the calf turns entirely white. White bison are considered sacred by many Native Americans.
Name[edit]
The term "buffalo" is sometimes considered to be a misnomer for this animal, and could be confused with two "true buffalo", the Asian water buffalo and the African buffalo. However, "bison" is a Greek word meaning ox-like animal, while "buffalo" originated with the French fur trappers who called these massive beasts b�ufs, meaning ox or bullock�so both names, "bison" and "buffalo", have a similar meaning. Though the name "Bison" might be considered to be more scientifically correct[by whom?], as a result of standard usage the name "Buffalo" is also considered correct and is listed in many dictionaries as an acceptable name for American Buffalo or bison. In reference to this animal, the term "buffalo", dates to 1625 in North American usage when the term was first recorded for the American mammal.[14] It thus has a much longer history than the term "bison", which was first recorded in 1774.[citation needed] The American bison is very closely related to the wisent or European bison.

He is so pretty amongst his flowers! Lovely capture! V/F

Thank you, Phyllis! I loved that there were flowers in the field.. it is so sweet.

Thank you, Nancy..I am having such fun. I hope to get a lot of my cats in hats listed. I have had two pieces featured in two different groups and that is so amazing to me! xxxooo