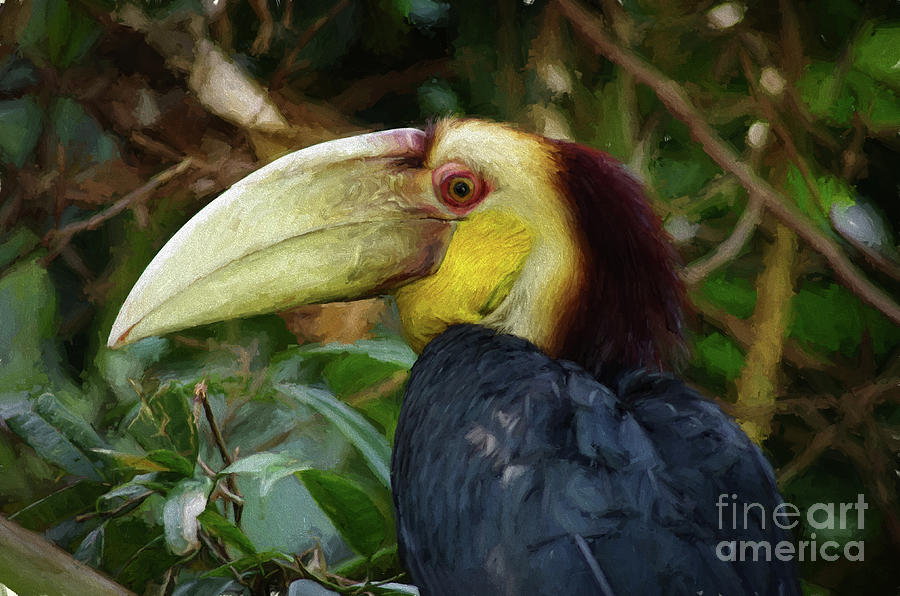 Photograph is enhanced through digital painting.
The wreathed hornbill (Rhyticeros undulatus), is also known as the bar-pouched wreathed hornbill. It is a species of hornbill found in forests from far north-eastern India and Bhutan, east and south through mainland Southeast Asia and the Greater Sundas in Indonesia, except Sulawesi. It is 75–100 cm (30–39 in) long. Males weigh from 1.8 kg (4.0 lb) to 3.65 kg (8.0 lb), and females weigh from 1.36 kg (3.0 lb) to 2.7 kg (6.0 lb). ] Both sexes are similar to the respective sexes of the closely related plain-pouched hornbill, but the wreathed hornbill can be recognized by the dark bar on the lower throat (hence the alternative common name, bar-pouched). Though commonly considered monotypic, evidence suggests some geographical variation in the appearance. The wreathed hornbill has been released in the U.S.A in Florida but there is no evidence that the population is breeding and and may only be there due to continuing releases or escapes from captivity.

Great post processing job and this is also well-captured. Love it, Aurelia.