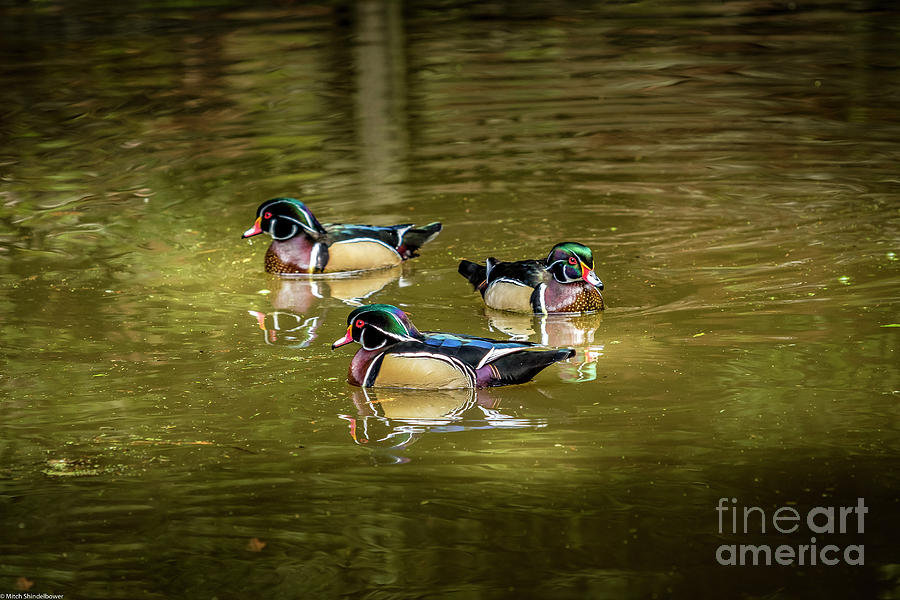 The adult male has distinctive multicolored iridescent plumage and red eyes,with a distinctive white flare down the neck. The female, less colorful, has a white eye-ring and a whitish throat. Both adults have crested heads.

The male's call is a rising whistle, jeeeeee; the females utter a drawn-out, rising squeal, do weep do weep, when flushed, and a sharp cr-r-ek, cr-e-ek for an alarm call.
The birds are year-round residents in parts of its southern range, but the northern populations migrate south for the winter.[9][10] They overwinter in the southern United States near the Atlantic Coast. 75% of the wood ducks in the Pacific Flyway are non-migratory.[10] They are also popular, due to their attractive plumage, in waterfowl collections and as such are frequently recorded in Great Britain as escapees—populations have become temporarily established in Surrey in the past, but are not considered to be self-sustaining in the fashion of the closely related mandarin duck.[citation needed] Given its native distribution, the species is also a potential natural vagrant to Western Europe and there have been records in areas such as Cornwall, Scotland and the Isles of Scilly, which some observers consider may relate to wild birds; however, given the wood duck's popularity in captivity, it would be extremely difficult to prove their provenance.[citation needed] There is a small feral population in Dublin.[

Gorgeous ducks! And I love the reflections! Beautiful shot!