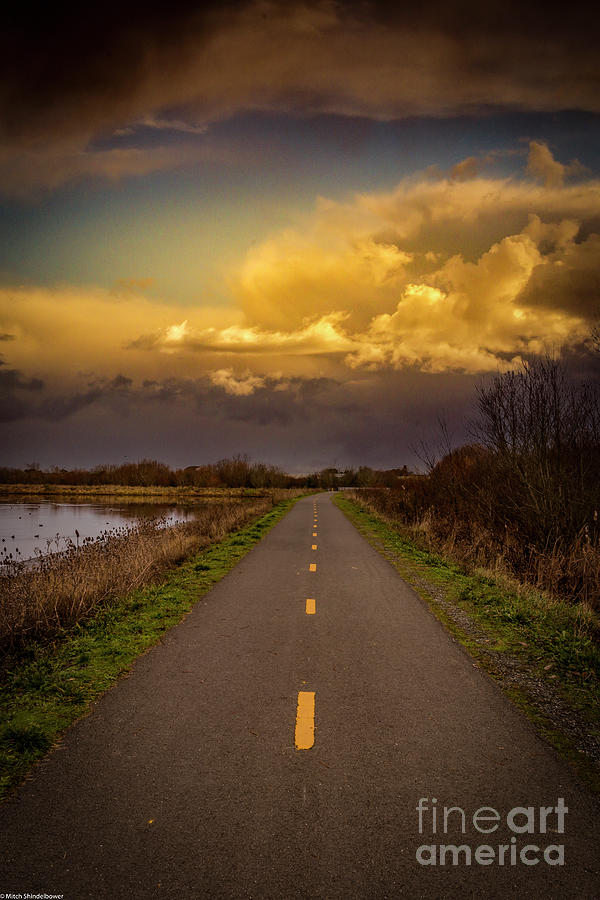 Makes a very nice notebook and phone case...Cyclepath....Bicycle path..Bike paths that follow independent rights-of-way are often used to promote recreational cycling. In Northern European countries, cycling tourism represents a significant proportion of overall tourist activity. Extensive interurban bike path networks can be found in countries such as Denmark or the Netherlands, which has had a national system of cycle routes since 1993. These networks may use routes dedicated exclusively to cycle traffic or minor rural roads whose use is otherwise restricted to local motor traffic and agricultural machinery.

The Fietspad or Bicycle Path in the Netherlands is logically constructed to link shops, housing, stations, schools, workplaces for everyday cycling.


This Fietspad or Bicycle Path is in the Netherlands safely linking housing.

A stretch of Ciclovia Adriatica, in Italy
The more sensible approach is based on efforts to increase Utility cycling. In countries like Denmark, the Netherlands and Germany the high levels of utility cycling also includes shopping trips e.g. 9% of all shopping trips in Germany are by bicycle.[1]

The UK has recently implemented the National Cycle Network.[citation needed]

Where available, these routes are often rail trails making use of abandoned railway corridors. A prominent example in the UK is the Bristol & Bath Railway Path, a 21-kilometre (13 mi) path for walkers and cyclists[2] that is part of National Cycle Route 4. Other UK examples include The Ebury Way Cycle Path, The Alban Way, the Hillend Loch Railway Path and the Nicky Line. In 2003 the longest continuous bike path in Europe was opened, along the Albacete-Valdeganga highway in Spain, a distance of 22 kilometres (14 mi).[3] Bogota's Bike Paths Network (Ciclorutas de Bogotá in Spanish), designed and built during the administration of Mayor Enrique Peñalosa attracts significant recreational use. Numerous cycle links between regions are being developed in Italy. The most important is the Ciclovia Adriatica, partially completed which extends, at times, from Trieste to Santa Maria di Leuca.[4]

The relative safety of bike paths that follow independent rights-of-way closed to motorized traffic is difficult to assess. In terms of car/bicycle collisions, this is clearly mediated by how the bike path network rejoins the main road network. In the English town of Milton Keynes, a study showed that cyclists using the off-road Milton Keynes redway system had on a per journey basis a significantly higher rate of fatal car-bicycle collisions at path/roadway crossings than cyclists on ordinary roads.[5] This safety can be altered substantially by design. For example, the Dutch Simultaneous Green Junction design has a nearly flawless record when it comes to accommodating cyclists at traffic light junctions.[6]

The consequences of other risks — falls, cyclist–cyclist collisions and cyclist–pedestrian collisions — are frequently not recorded in official accident figures and may be available only via local hospital surveys. As a general rule, those bike paths with the highest perceived safety tend to be those engineered on the assumption of vehicular rather than pedestrian traffic. Thus the most popular examples tend to be converted road or railway alignments or constructed to the same standards used by road and railway engineers.

I love the light and colors and that sky, and love the perspective! Beautiful shot!