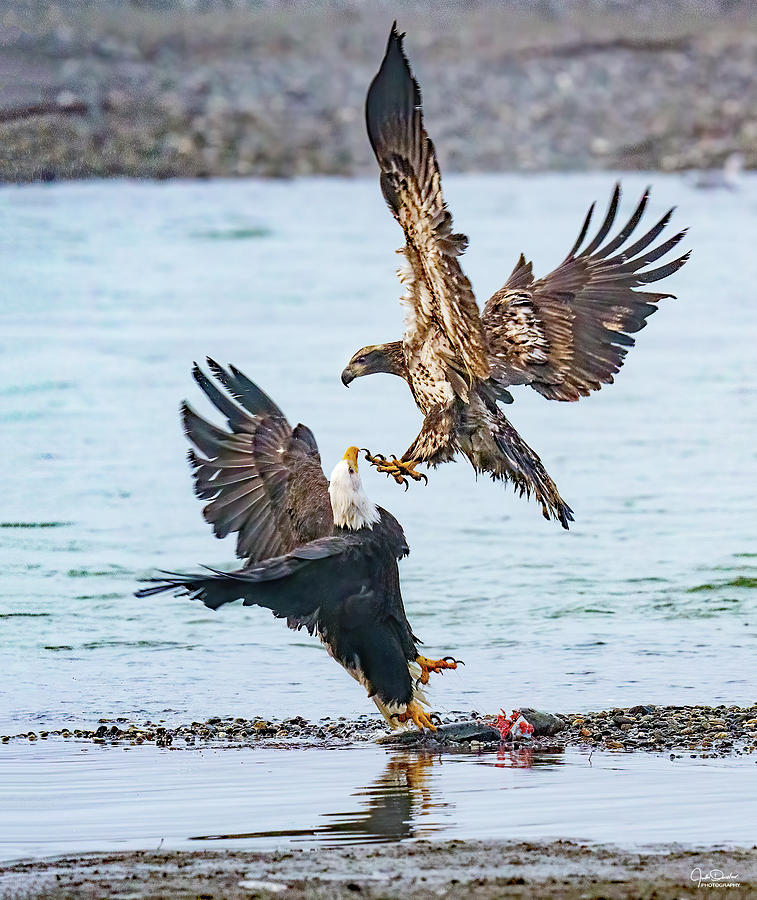 An immature Bald Eagles trying to steal a salmon from an adult bird, very early in the morning on a cloudy day. The element of surprise works well, and the younger bird did manage to get the fish, but only for a minute because then another adult bird flew in and took it from him (or her). There are lots of slow fish in the river that have spawned and are close to dying, but the eagles prefer stealing fish from one another, usually fish that have already been dragged onto the ground.

Fabulous action photograph of a pair of Bald Eagles fighting over a fish! F/L

Gorgeous image, Judi, congrats on all your features! F

Congratulations, your work is Featured in "A Birding Group - Wings" I invite you to place it in the group's "2020-2022 Featured Image Archive" Discussion!! L

Wow, what an incredible capture!!

Congratulations on your Dawn's Delight, Judi, so well deserved! L/F

Congratulations on your "Dawn's Delight" feature. It's no surprise that it was chosen. Such a dramatic capture.

Thanks so much, Steve!

Congratulations! You are one of 10 Dawn’s Delights for 12/05/2021!! This fine image of an identified wild bird is now featured on the homepage of Wild Birds Of The World - A Nature Photography Group. Please take a moment to add it to the 2021 Features Archive and Thanks discussion for additional visibility.

Thank you so much for the Dawn's Delight -- you have made my day, Dawn, thank you!

This is amazing! Awesome work! Shared on FB

Thanks very much, Linda!

Congratulations! .... Your wonderful work of art has been presented on the HomePage in the group, 'ART FOR PASSION - PASSION FOR ART'. Thanks for sharing with all of us. If you wish, you can archive it permanently or promote it further in the Discussions Tabs .... Nancy

Nancy, thank you so much for the feature!

Thanks so much, Angela!

Thanks very much, Katie!