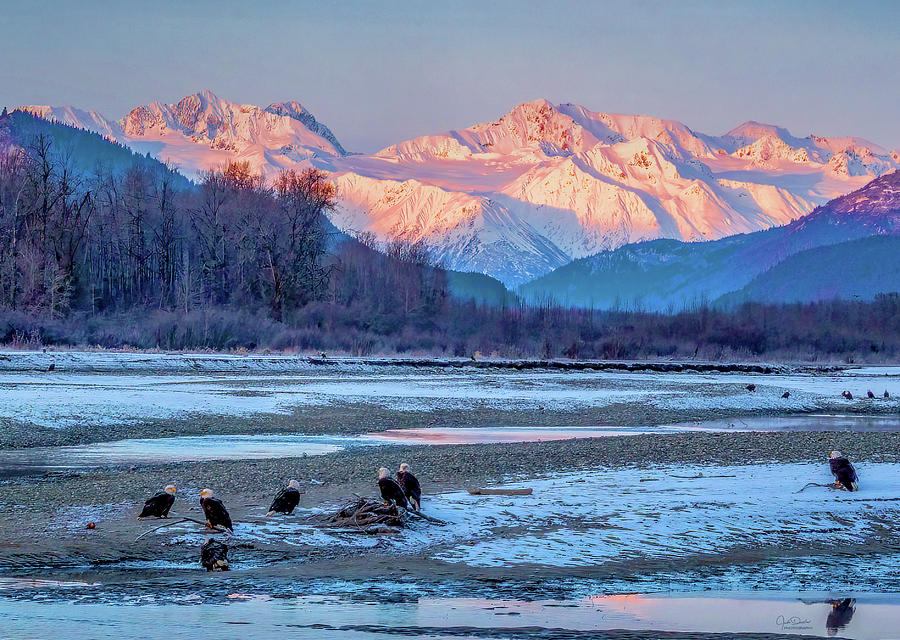 The sun hits the mountains at dawn in this Alaskan scene. What makes this scene special is that many, many Bald Eagles hang out here; you can see some of them gathered at the edge of the river, and there are dozens more in nearby trees, altogether a hundred or so within view, and probably a few hundred in the nearby area. They gather here year round, but especially in November, when the salmon spawn a little ways up river, so there are many very slow salmon just waiting to be fought over and eaten by the eagles and gulls, as well as a by a few bears that have not yet started hibernation.

Outstanding beach bird composition, lighting, shading, color and artwork! F/L voted for this piece in the contest BIRDS ON THE BEACH!

The awesome sight of the rising sun lighting the mountain top is only out done by the gathering of so many eagles. I would be in heaven to see that.

Fabulous photo of a gathering of Bald Eagles at sunrise with magnificent snow-covered mountains in the background, great colors, light and reflections, perspective, and composition! Very nice work! F/L

What an amazing sight, have never seen so many together LF

Congratulations! .... Your wonderful work of art has been presented on the HomePage in the group, 'ART FOR PASSION - PASSION FOR ART'. Thanks for sharing with all of us. If you wish, you can archive it permanently or promote it further in the Discussions Tabs .... Nancy

Superb, always nice to see shots of iconic species in their habitat!