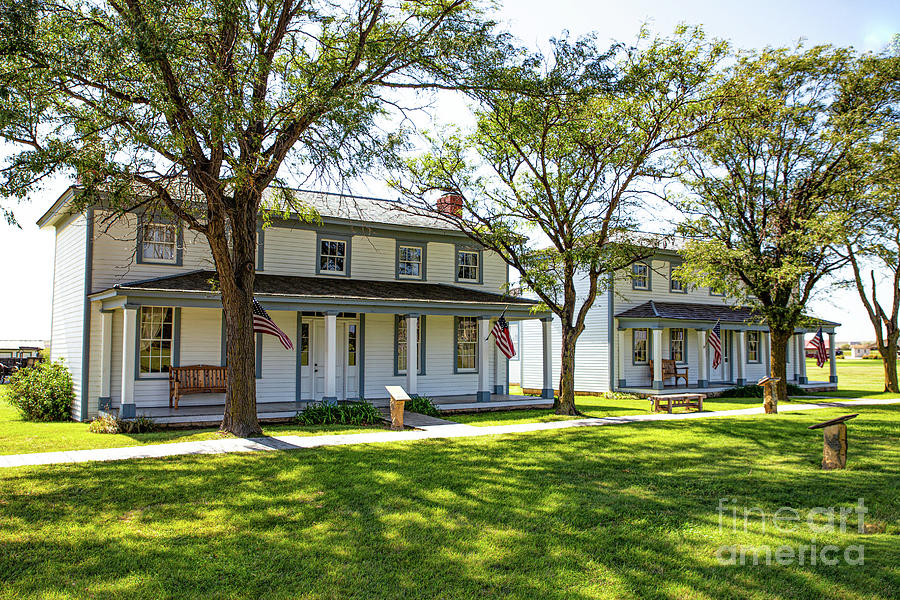 Fort Hays by Lynn Sprowl.
Not much remains of Fort Hays. These Officer quarters and a museum is almost all that is at the site. Although, well cared for, it was not what was expected.
Shortly after the Civil War, railroad builders and settlers began pushing into central and western Kansas with ever-increasing intensity, provoking resistance from the Native American inhabitants of the region. To provide protection, the federal government established military posts on both the Santa Fe Trail, a major immigrant route that passed through eastern and southern Kansas, and the Smoky Hill Trail, a stagecoach and freight road to Denver.
Fort Fletcher, later renamed Fort Hays, was established on the Smoky Hill Trail in 1865. After the fort was virtually destroyed in a flash flood in 1867, it was relocated to a site now just south of the City of Hays. Unlike the military posts of the earlier eastern frontier, plain forts seldom had stockades or fortification walls. Instead, officers' quarters, barracks, headquarters, storehouses and other buildings were grouped around a central parade ground. At Fort Hays, a stone blockhouse, hexagonal in shape with rifle slits and two wings extending north and south, was built as a defensive structure.
Garrison strength at Fort Hays normally averaged three companies, or about 210 men. Fort Hays was home to the 7th U.S. Cavalry, commanded by Lt. Col. George A. Custer, the 5th U.S. Infantry, commanded by Col. Nelson Miles, and the 9th and 10th U.S. Cavalries, better known as the "Buffalo Soldiers." Marcus A. Reno, George A. Forsyth, and Philip H. Sheridan were also among the noted military figures associated with the Fort.
In those days, Hays City was a wild town, filled with saloons and dance halls. The legendary James B. "Wild Bill" Hickok served as county sheriff for a few months in 1869, but left town the next year after a brawl with some troopers from Fort Hays. Summing up her impressions of Hays City while she and her husband were encamped near Fort Hays, Elizabeth Custer said, "there was enough desperate history in that little town in one summer to make a whole library of dime novels."
With less need for the post, Fort Hays was abandoned on November 8, 1889.