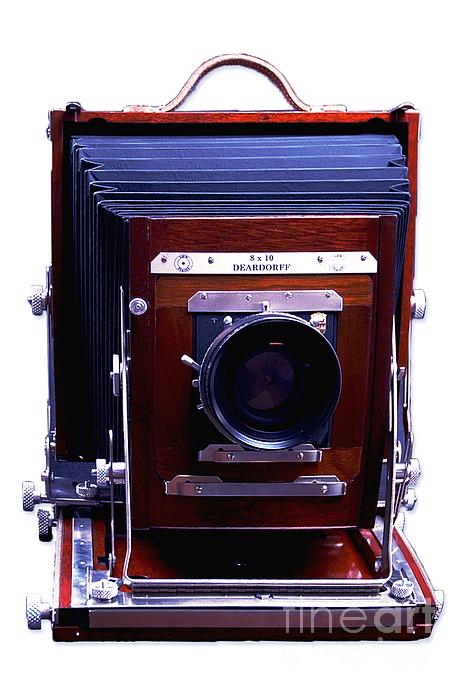 Laben F. Deardorff repaired cameras for nearly 30 years before building the first 8⨉10 Deardorff. He had been employed by Rochester Camera Company in the 1890s.
Deardorff, specifically, "L.F. Deardorff & Sons, Inc." was a manufacturer of wooden-construction, large format 4"x5" and larger bellows view camera from 1923 through 1988.
The view camera is a large format camera in which the lens forms an inverted image on a ground glass screen directly at the plane of the film. The image viewed is exactly the same as the image on the film, which replaces the viewing screen during exposure.

This type of camera was first developed in the era of the daguerreotype (1840s-1850s) and still in use today, though with many refinements. It comprises a flexible bellows that forms a light-tight seal between two adjustable standards, one of which holds a lens, and the other a viewfinder or a photographic film holder. There are three general types, the monorail camera, the field camera,and press or technical cameras.

The bellows is a flexible, accordion-pleated box. It encloses the space between the lens and film, and flexes to accommodate the movements of the standards.The front standard is a board at the front of the camera that holds the lens and, usually, a shutter.

At the other end of the bellows, the rear standard is a frame that holds a ground glass plate, used for focusing and composing the image before exposure—and is replaced by a holder containing the light-sensitive film, plate, or image sensor for exposure. The front and rear standards can move in various ways relative to each other, unlike most other camera types. This provides control over focus, depth of field, and perspective. The camera is usually used on a tripod or other support.

Congratulations for the feature of your work on the homepage of Greeting Cards For All Occasions 6-10-16, liked!