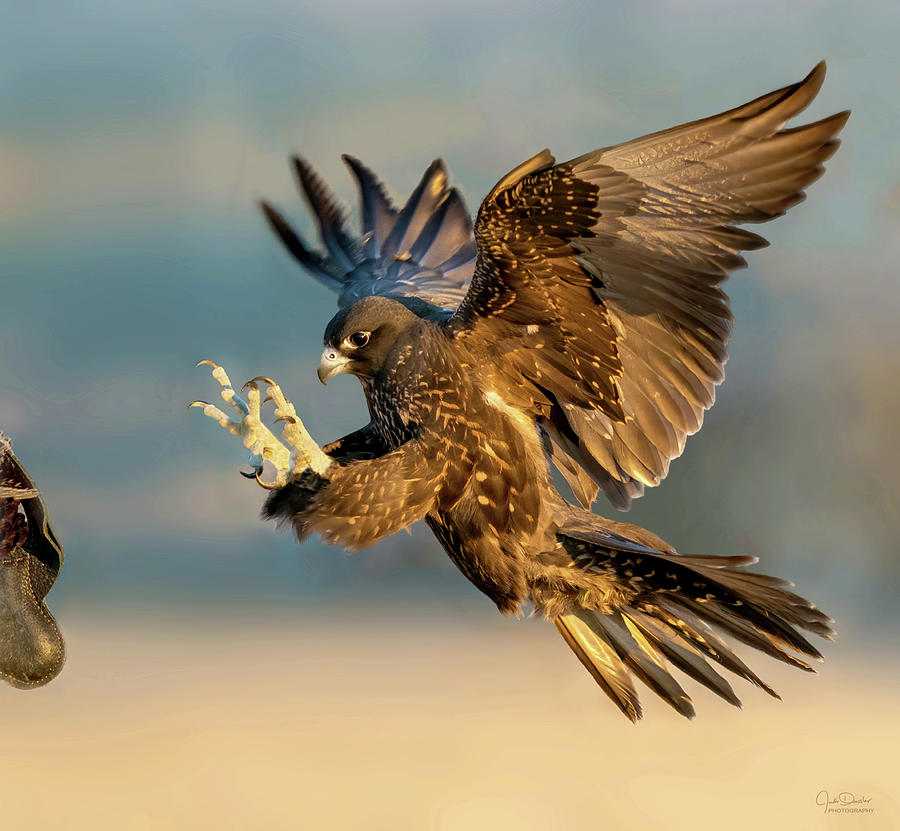 A good friend of mine is a falconer, and acquired this young beautiful dark morph chocolate gyrfalcon only three weeks before this photo was taken. It took most of those three weeks for the bird to get well enough used to him so that he could finally start to fly her in a field a few miles from his house. In this image taken of one of her very first flights, she flew about 25 feet to grab some food from the "lure", a type of leather glove specifically used by falconers to train their falcons. She had no trouble grabbing the prize in flight!

Although the classic image of a Gyrfalcon is a regal white bird with black spotting, the birds occur in shades of white, gray, and dark brown. In North America, gray birds are more numerous than the other two morphs. Adults are heavily barred on the back, wings, and tail, with spotted underparts. Juveniles are heavily streaked; the flight feathers of dark juveniles are lighter and contrast with the rest of the wing.

The largest falcon in the world, the ghostly Gyrfalcon is a fierce predator in the High Arctic, where it chases down ptarmigans in flight or plummets from the sky at breathtaking speeds to strike prey to the ground. Nesting on remote cliffs in the far reaches of Canada and Alaska, Gyrfalcons in North America are safe from most human disturbance but face challenges from a warming climate. They are rare winter visitors to open habitats in the northern United States.

WOW, this is absolutely magnificent. I love it

Congratulations on your tie for 3d place in the Bird Photography contest!

What a great capture Judi! F/L

Great catch, Judi, congratulations on your top finish in the BIRD PHOTOGRAPHY CONTEST!

Nice image Judi. Voted for it in the Bird Photography contest. L/F/V

Wonderful action. Congratulations on your feature in Poetic Poultry. FL

Amazing clarity and wonderful expression captured in this wonderful stop action shot Judi. So enjoyed reading your artists notes......can't take my eyes off this image!!!! L/F