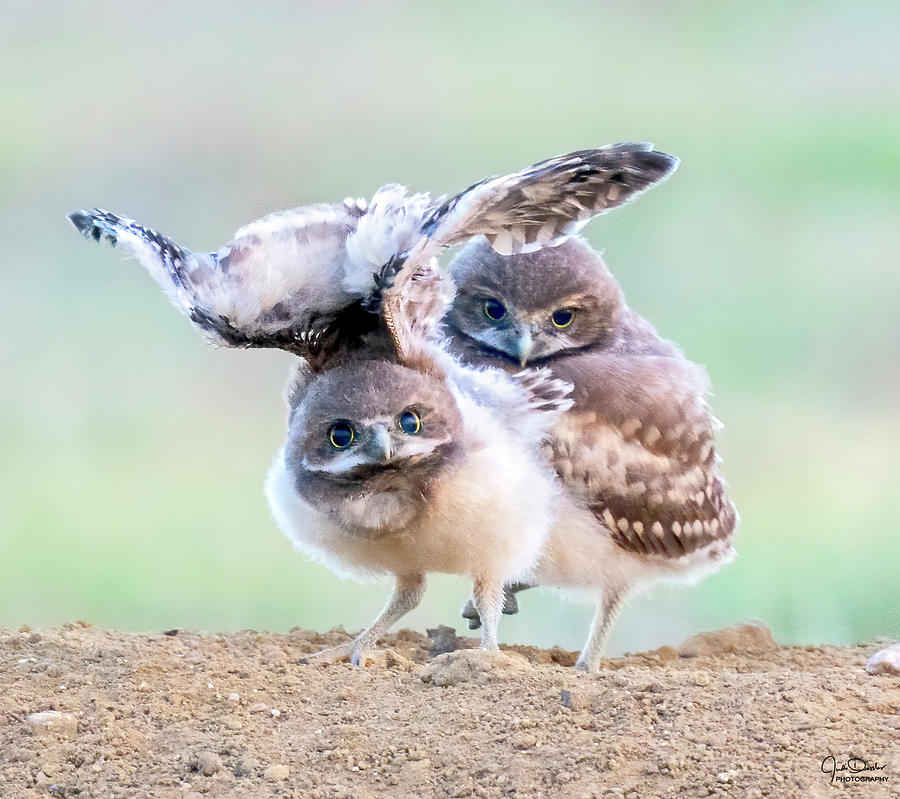 These adorable Burrowing Owls were two of a family of nine babies, 3 - 4 weeks old. The one in front is stretching its wings, while the other looks on, cuddling up to its sibling. For now, mom and dad feed them, and then as they get older, these owlets will begin to try to catch bugs on their own and will venture away from the nest, while gradually learning to fly. They wil stay near their burrow until they're ready to fend for themselves at the end of the summer.

Baby birds in general have a tough time surviving their first few weeks of life, and Burrowing Owls are no different. A few weeks later, only two of the nine were seen. Lack of food, predators, man made problems (cars, wire fences, etc.) and disease can kill them. In this case, the dad disappeared, probably killed somehow, and the mom could not manage to feed all the babies.

Burrowing owls are born underground in burrows, often these are burrows built by prairie dogs. They hunt crickets, grasshoppers, and other bugs, as well as small mammals such as mice, and small reptiles. They are excellent parents, bringing food to their babies until the young ones are hunting bugs for themselves, and even afterwards for a while.

The adults have stripes across their chests; the babies start getting these stripes as they get a little older. Baby burrowing owls can be very entertaining to watch as they run and jump and play with each other!

Photo taken on June 30, 2021, in the Pawnee Grasslands of Colorado

So cute! You are a real magic fairy who works wonders.

I'm back to your owl gallery. Again, I am astounded at your ability to capture these moments. This is wonderful, Judi! like/f

Adorable capture of these two babies! Love this! l/f/t/p/fb

this is incredibly cute. L