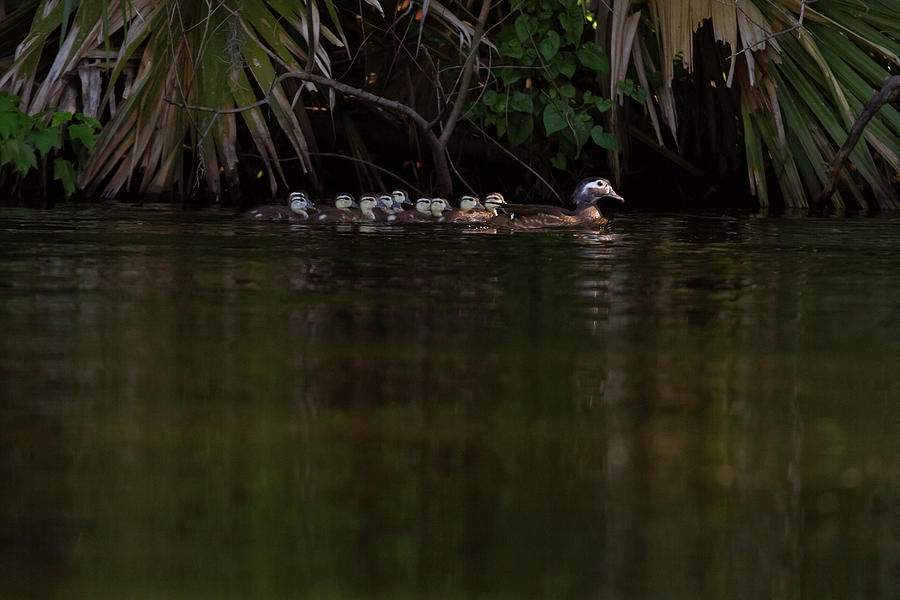 A female wood duck leading a raft of ten little ducklings along the edge of the Ocklawaha River in Florida.

This image has been featured in the following groups:
Wild Birds Of The World
& Wildlife ONE A DAY

Wood ducks are found in forested wetlands, along rivers, ponds, lakes, swamps and marshes. They breed from southern Canada through much of the eastern United States into Cuba and in the west coast states. They winter in the southern portion of the breeding range plus the southwest states and Mexico.
These are one of the few ducks that nest in tree cavities, usually over or near the water. Declines in the number of natural cavities have prompted the placement of nest boxes which the ducks readily utilize. After hatching, the chicks drop from the nest and make their way to the water.
The males are very colorful when in breeding plumage, their head has a long green crest with shades of purple and white markings. The breast is chestnut colored, the belly is white and they are reddish-violet under the tail. The back and tail are black with a metallic sheen. Non-breeding males are gray, without the crest but retaining white head markings. Females are similar to non-breeding males but with white around the eye tapering to the rear instead of the male's head stripes.

Lovely photography Paul, with the fine low POV at their level. Likes.

Thanks. That's one of the advantages of shooting from a kayak.