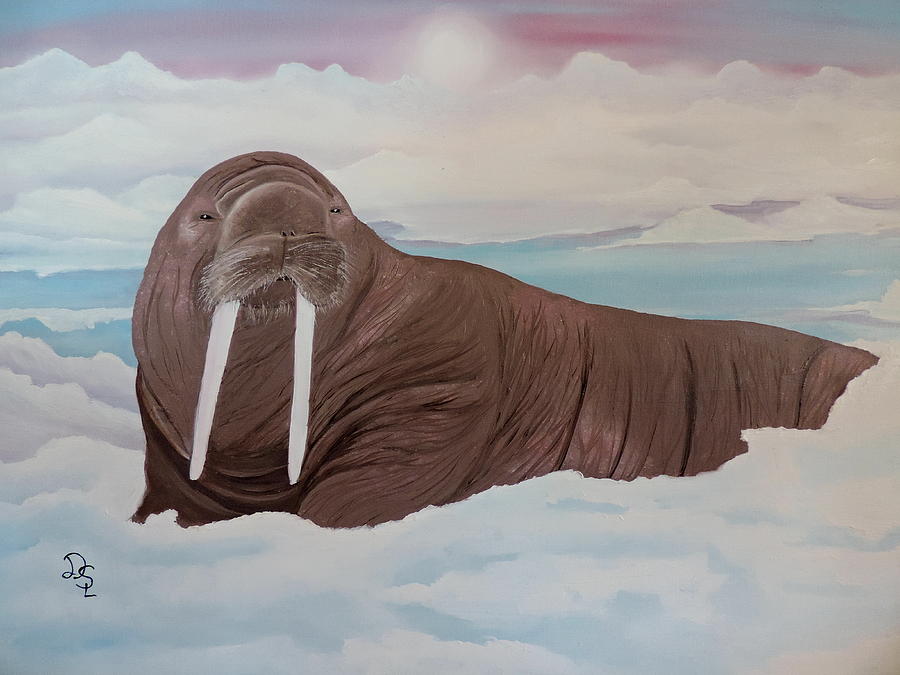 Walrus on shore, basking in the late Alaska winter sun. (Framed)
The walrus inhabits both land and water, though most agile when in water.It is a superb swimmer with the ability to dive as deep as the ocean floor. He maneuvers quite speedily on land as well. He waljs on all four fins unlike other pinnepeds that have to drag their lower bodies with their fore fins. They live in large herds, dependent on the group for its survival. The group will join together t protect a single walrus that becomes under attack. As a totem, the walrus teaches the importance of connectedness ,and the lesson that each individual is important. Its tusks serve as a tool for climbing out of the water, onto the ice, though also for defensive purposes when attacked. He also has a thick skin which serves as an armour from natural predators. He is a multifaceted character, who is interesting to study. The walrus is said to be the keeper of wisdom and secrets.

What a handsome fellow! LF

Speaking of connectedness, Dianna, have I got a gal for Walter: Sieglinde at the Baltimore zoo, whom I used to take our first-born many years ago to visit. Rona considered her the cat's meow (or perhaps a bit louder than that...). I can picture them roaring a duet--with intermittent fin splashes...

Many thanks for the feature Troy

Thanks so much for the honorable feature Romuald

Many thanks for the honorable feature Eti.

Many thanks for the honorable feature Naomi

Thanks for the honorable feature Naomi

This walrus obviously rises to great heights in your artistic Wonderworld, Dianna, and rightly so. You've treated his chocolaty hide with all the intricate detail it deserves! I also liked your choice of Peter De Jager's "Horse in the Mist" for Nature's Wonders; thanks for including my 'Liberty Place.'

Thanks so much for the feature Mariola :-)

Thanks so much Barbara, greatly appreciated :-) .

Your outstanding artwork has been chosen as a FEATURE in one of the most highly viewed Art Groups on Fine Art America. MOTIVATION MEDITATION INSPIRATION! From the hundreds of pieces of artwork received daily to review and choose from, your work has been chosen because of it's Excellence! Congratulations!

Thanks for the feature Svetlana :-)

Thanks for favoriting Kathy :-)

WOW WHAT A FANTASTIC PAINTING DIANNA

Thanks for the favorite on this Kathy. Much appreciated.