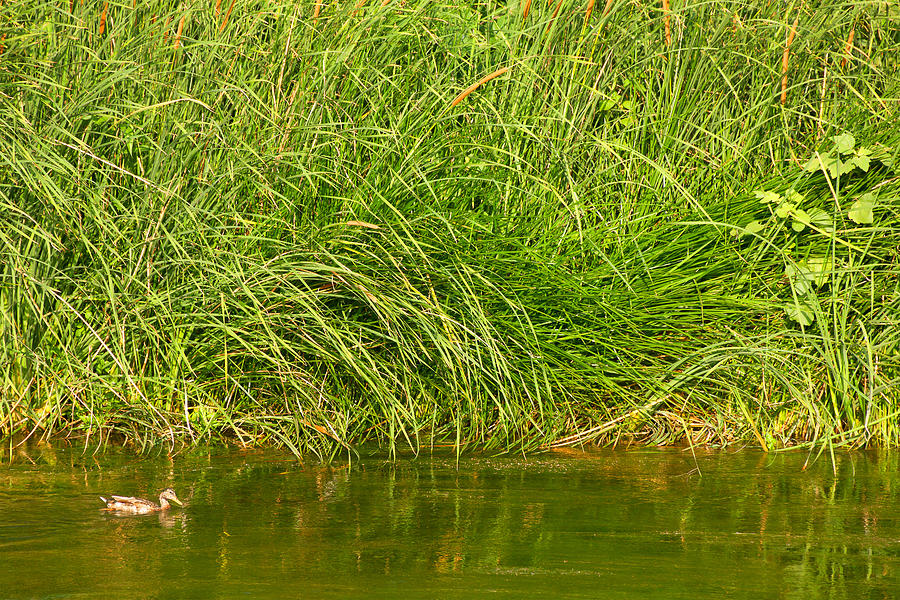 This is an early morning view of the Los Angeles River, a wonderful urban wildlife habitat undergoing renewal. This is a companion to the image I posted recently titled "Urban Wildlife Habitat - Los Angeles River", and is part of a series of image I have been and will be posting on the Los Angeles River wetland and the wildlife that it supports. In some of these images, the wildlife is only a small part of the composition, as here, the emphasis being on the habitat. Seen here is a lone Mottled Duck (Anas fulvigula), providing a nice foreground anchor. I was attracted to this composition by the large wild grasses in early morning light providing a nice luminous background.
A large print of this image would be a great wall art for your home, office and business. It would bring a sense of peace and tranquility. The image is also available for rights-managed licensing at
http://licensing.pixels.com/profiles/ram-vasudev.html?tab=artwork

You may also be interested in my other images on Wildlife of the LA River, in my Los Angeles County gallery at:
http://fineartamerica.com/profiles/ram-vasudev.html?tab=artworkgalleries&artworkgalleryid=384795

The LA River is undergoing an extensive rehabilitation in an attempt to return it and its wildlife to the original glory. Historically, the river provided a source of water and food for the Tongya people before the arrival of the Spanish. It was an alluvial river that ran freely across a flood plain that is now occupied by Los Angeles, Long Beach and other cities in Southern California. Its path was unstable and unpredictable, and the mouth of the river moved frequently between Long Beach and Ballona Creek. In the early 19th century, the river turned southwest and discharged into the Santa Monica Bay. A flash flood in 1825 diverted its course to its present one, discharging into the San Pedro Bay. Unpredictable and devastating floods continued to plague it well into the 1930s, leading to calls for flood control measures. The Army Corps of Engineers completely encased the river's bed and banks in concrete, with only a trickle of water usually flowing down its middle. It served primarily as a flood control channel, fed by storm drains. As a result, much of the original wildlife and 95 percent of the riparian areas were wiped out, according to a recent environmental assessment.

Things are changing quickly for the better, though. A move is afoot, in response to environmental concerns, to rehabilitate the LA River to its splendor of a hundred years ago from the eye sore that it was quite recently. The Army Corps of Engineers, with support from the Federal government, the city and the state, is developing an extensive plan to transform two segments of the river stretching 11 miles in length into green space for natural habitats for wildlife by restoring wetlands that have been lost to urban sprawl. This in addition to cleanup effort from local environmental groups. The cleanup seems to be coming along quickly, as seen in this scene I witnessed yesterday. Just a year or so ago, I had noticed lot of trash on the banks, including Styrofoam cups. None of that today, and this part of the River seems quite pristine.