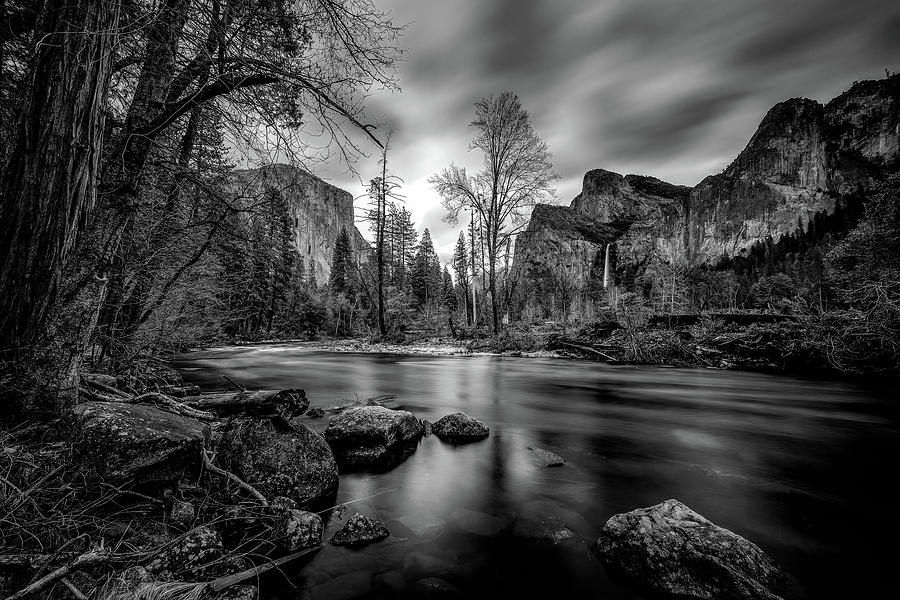 For this image I used a long exposure to achieve a smooth artistic look in the water and in the clouds. But like most rivers coming down from the High Sierra in early spring, the Merced River is anything but smooth. Here you can see ample evidence of this along its banks.

Floods can happen here due to peak spring melt or rain-on-snow events any time of the year. Yosemite's flood of record is 23.45 feet at Pohono Bridge (where flooding begins at 10 feet), and it occurred on January 2, 1997 as a devastating five-day rain-on-snow event. It resulted in the worst flood in Yosemite National Park’s history. The sudden inundation washed out roads, campgrounds, lodges and utilities, and it stranded several thousand stunned visitors and employees in the narrow Merced River valley. The resulting damage was so significant that park officials closed Yosemite to the public until March 14, and even then, it was only partially reopened. While thankfully no human lives were lost, it resulted in total financial losses of nearly 200 million dollars, and it took years to rebuild park facilities and infrastructure throughout Yosemite Valley and the roads leading into it.