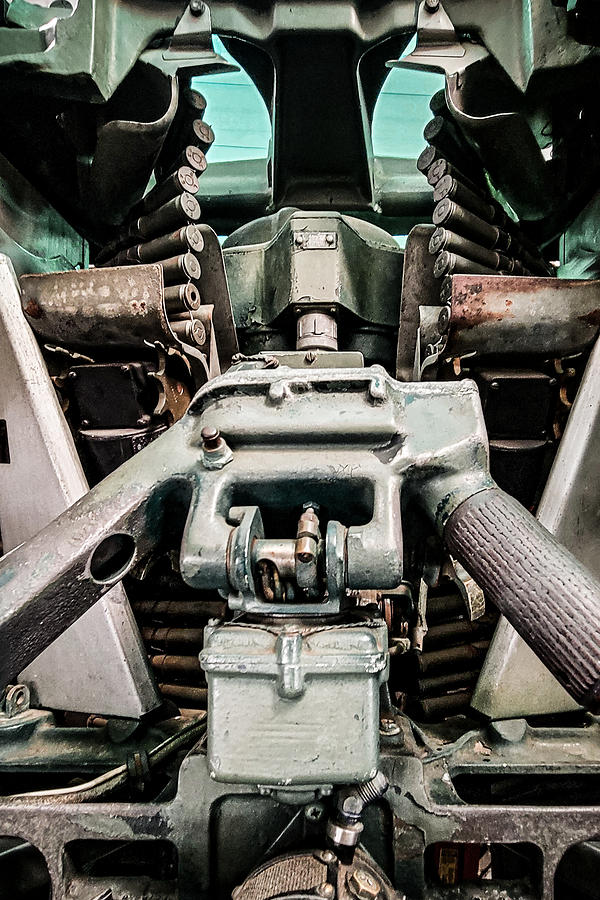 A view looking into the top turret of Sentimental Journey, a restored B-17 Flying Fortress from the World War II era. Sentimental Journey, currently on display at the Commemorative Air Force Museum in Mesa, Arizona. Out of 12,731 B-17 bombers produced, she is one of only five that remain flight worthy today, and probably the most accurately restored.

The top turret on the B-17 is one of the first fully-powered machine gun turret designs in America. The two fully automatic, belt fed, .50-caliber M2 Browning machine guns, were powered by an electro-hydraulic system and had a combined rate of fire of 1,400-1,600 rounds per minute. Markings on the bullet casings seen here indicate that they were manufactured at the St. Louis Arsenal in 1943.

The top turret gunner also served as the flight engineer for the bomber crew. Not only was he responsible for protecting against attack from above, he was also responsible for knowing all the systems on the aircraft, as well as monitoring fuel and engines during flight.

Sentimental Journey came off the production line in 1944 and only served a brief stint in the Pacific theater before being placed in storage, then reassigned for photo-mapping. She later served as an air-sea rescue craft and a drone during post war nuclear testing. Now she serves to educate the public and offers once in a lifetime opportunities to those who wish to relive history aboard a B-17 Flying Fortress bomber in flight.