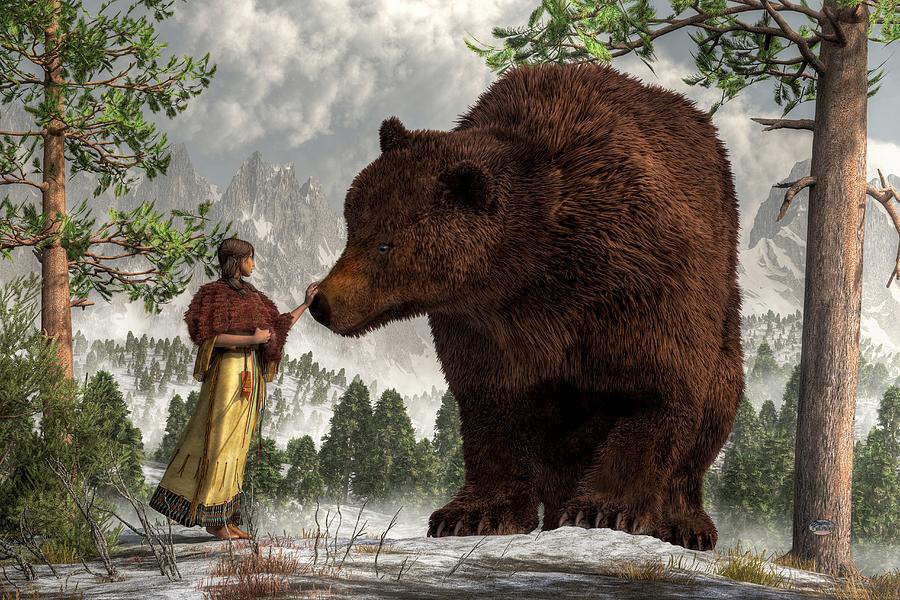 An American Indian woman touches the muzzle of a giant grizzly bear. They stand in a snowy wilderness surrounded by fir trees and high snow covered mountains. Ominous clouds fill the sky.

"The Bear Woman" is a Blackfoot legend about woman who takes a bear for a husband, then later becomes a bear herself and causes great trouble. Here is the (very) short version:

A young Native American woman refuses to marry. Every day while her father and brothers are out hunting, she disappears leaving her little sister alone for long periods. One day, her sister followers her and finds that she has taken a bear as a husband. The little sister tells their father who, with his sons, kills the bear. Later, the bear woman gains the ability to transform herself into a bear. She kills most of people in the village. Her brothers develop a plan to lure her into a trap. They have the younger sister anger the bear woman who takes on her bear form again and chases her, but the bear woman figures out the brothers' trap and chases them all. A pursuit ensues involving much magic. The bear woman is eventually killed by one of her brothers, but having no people to return to, they all decide to go up into the sky where they become the stars of the Ursa Major constellation.

When I read this story, I knew I wanted to create an illustration (or two) for it. For this one, I decided to depict the early scene where the little sister finds the Bear Woman meeting the bear in the wilderness. To emphasize the supernatural tone of the story, I made the bear gigantic, more of a bear spirit rather than an actual bear, a physical manifestation of the Ursa Major constellation that ends the story.

Rather than traditional forms of art such as painting or photography, I use a computer to create my images., It's called 3D Rendering and works like so: I make a scene by sculpting and arranging digital models in a virtual 3D space., After stipulating lighting and atmospheric effects, I have the computer create a simulated environment from which I take a virtual snap shot of the scene. Then, using image editing software and something more akin to traditional painting techniques (via a Wacom tablet), I go over the work adjusting colors, adding brushwork, painting in details, etc. to produce the final image. Software I use includes: Sculptris ZBrush, Blender3d, Vue, Daz Studio, and GIMP.


Thanks for looking!
Daniel Eskridge

That's a beautiful painting, congratulations on your sale Daniel!

Congrats on your sale! L/F

I enjoyed reading about the legend and a perfect illustration Daniel! f/v

I keep coming back to the stunning image.....The power of a woman! Love, Love, Love this!

This is fabulous Daniel. I love the story behind it particularly and your interpretation of the bear as more of an animal spirit than the 'real thing'. It works really well :) l/f

A superb image and I love the bear's woolly coat. A great background too. L/F.

Thanks for the feature, Mariola!

Daniel, this is truly remarkable! I love the story description and your way of bringing it to life. F&L :~)

WOW THIS IS AWESOME LOVE THIS DANIEL

Oh, I love this! So beautiful and powerful....Wonderful work, Daniel.

Excellent illustration for the legend Daniel!

I like the description nearly as much as the painting, Daniel. This is quite a beauty. f/v

So beautiful...just love this Daniel...L/F

What a great story to match a great image. Love the backdrop of mountains too! F/L

Amazing images and amazing stories to go with them. you are so very talented Daniel. v/f

Great image and a great fit for the short story in the description! L

Magnificent details! beautiful and so gentle!

Wow that's a big bear, wouldn't want it to be my enemy :) very nice work F/L

Looks great, and a nice storyline to go with it.