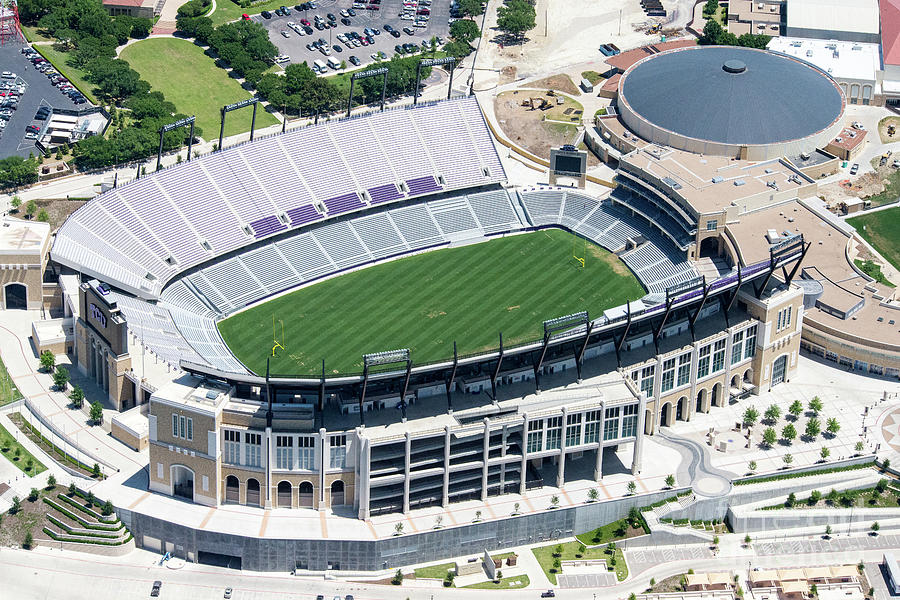 Flying back to town one day I noticed I was close to the TCU stadium so I lowered my altitude to capture a close shot of the famous Amon G Carter TCU Horned Frog football stadium.

When the Frog faithful began to overflow the stands at the team's former home, Clark Field, the TCU Board of Trustees realized that a new stadium was needed for the TCU football program. Thus, the Board of Trustees voted for a new stadium and created the Athletics Committee to study the cost as well as find a way to pay for it. Momentum for the new stadium hit an all-time high when the Frogs claimed their first Southwest Conference championship on November 30, 1929, when all-conference quarterback Howard Grubbs engineered a late fourth-quarter drive to tie crosstown rival SMU, 7-7. In Francis Schmidt's first season with the Frogs, TCU concluded the season with a 9-0-1 record, and stadium talks began to heat up.

The Athletics Committee recommended that the University begin a "quiet campaign" headed by Fort Worth Star-Telegram owner and publisher Amon G. Carter to raise $150,000 for the stadium that would seat roughly 30,000. The newspaper publisher recommended that Fort Worth residents raise 60 percent of the money for the stadium. Eventually, the sides settled on selling mortgage bonds to construct a $350,000 stadium that would seat 27,000, but could expand to over 60,000. The TCU Board of Trustees endorsed the settlement, and in 1929, a football stadium began to take shape. Less than one year after beginning construction on the stadium, the Frogs played their first game against the University of Arkansas on October 11, 1930. With Amon G. Carter Stadium at capacity of 22,000, the Frogs defeated the Razorbacks soundly by a 40-0 count, which marked a crowning achievement and the perfect dedicatory battle.

There have been many upgrades and facelifts since but this is still a tried and true, open air, natural grass football field.

As featured in the FAA Group Showcasing The South August 12, 2018

nice areal image! used to watch TCU play the Wyoming Cowboys in Laramie before they bolted to the Big 12 from the Mountain West.

Congratulations Paul, for your home page feature in the Showcasing The South group. As a permanent record, youâ€™re invited to post your image in the Featured Image Archive thread in the group discussions. L

Getting close to that time of year...can't wait