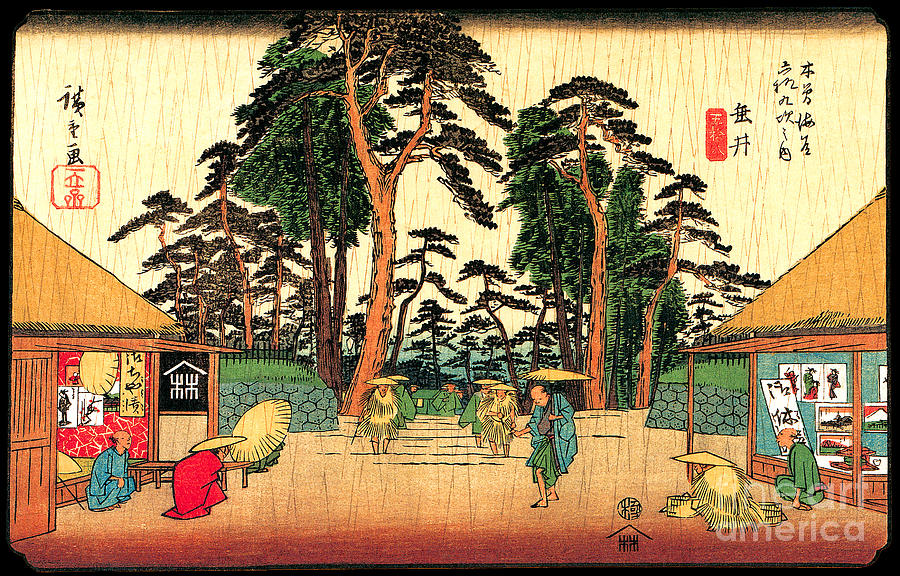 Tarui, Utagawa Hiroshige, Tarui-juku (垂井宿, Tarui-juku) was the fifty-seventh of the sixty-nine stations of the Nakasendō. It is located in the present-day town of Tarui, Fuwa District, Gifu Prefecture, Japan.Tarui-juku was divided into three parts: western, middle and eastern. Its honjin was located in the middle section. The post town itself served as a major transportation hub for western Mino Province, as it was one end point for the Minoji, which connected the Nakasendō with the Tōkaidō at Miya-juku. It also sat on the banks of the Ai River. In 1843, the post station of Tarui-juku had 1,179 residents and 315 buildings. Among the buildings, there was one honjin, one sub-honjin, and 27 hatago. Utagawa Hiroshige Japanese 1797 – 1858, was a Japanese ukiyo-e artist, considered the last great master of that tradition. Hiroshige is best known for his horizontal-format landscape series The Fifty-three Stations of the Tokaido and for his vertical-format landscape series One Hundred Famous Views of Edo. The subjects of his work were atypical of the ukiyo-e genre, whose typical focus was on beautiful women, popular actors, and other scenes of the urban pleasure districts of Japan’s Edo period (1603–1868). The popular series Thirty-six Views of Mount Fuji by Hokusai was a strong influence on Hiroshige’s choice of subject, though Hiroshige’s approach was more poetic and ambient than Hokusai’s bolder, more formal prints. Subtle use of color was essential in Hiroshige’s prints, often printed with multiple impressions in the same area and with extensive use of bokashi (color gradation), both of which were rather labor-intensive techniques.