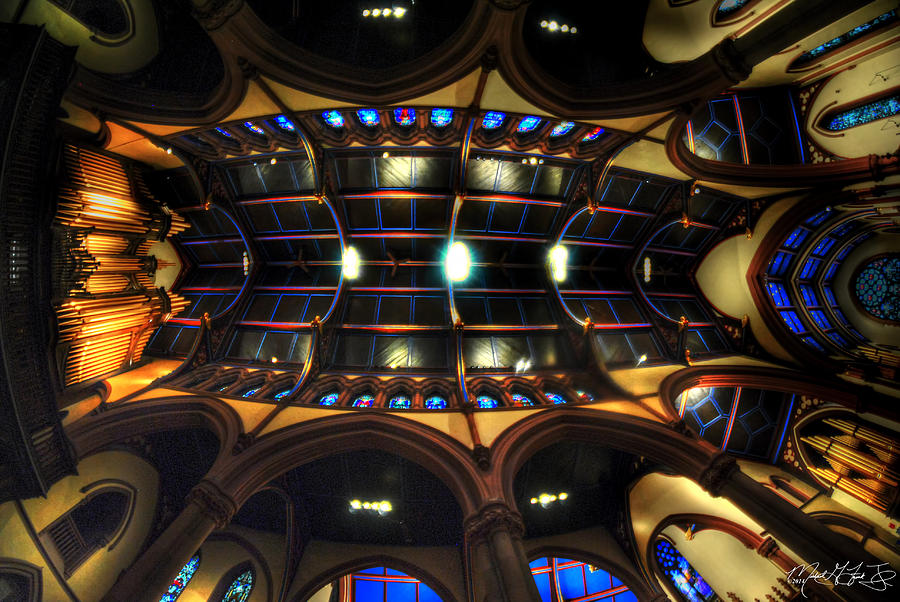 1850 - German society buys the building and moves it to Genesee and Hickory Sts. (replaced in 1877)

1851 - St. Paul's Episcopal Church -- designed by Richard Upjohn -- erected
Upjohn is considered the greatest American Gothic church designer in America. His most famous work is
Trinity Church in New York City, but his biographer reports that Upjohn considered St. Paul's his best work.
1866 - Chosen as the Episcopal Cathedral for the Diocese of Western New York

1870 - Spires on the two towers were finished
1883 - The Rev. Dr. William Shelton dies, having served St. Paul's as rector (1829-1881), as later as rector
emeritus (1881-1883) when he retired. The high altar and the pulpit are memorials to him, and Shelton
Square bore his name until Cathedral park was built in 1970, but the church building itself is his chief
and lasting memorial.

1888 - On Ascension day, May 10, a gas explosion and resulting fire destroys interior, but Upjohn's stone walls
remained solid.
"Owing to excessive unregulated pressure in the natural-gas pipes, a number of explosions occur:
one of them, in the basement of St. Paul's Episcopal Church causes a fire which leaves only the towers
and walls standing; loss estimated at $100,000 (Photo); many gas meters in other buildings explode and
several small fires occur, but no other serious damage is reported." -
"Pictorial Year-Book and Calendar," 1888." From the Buffalo Express. Buffalo: Matthews, Northrup, & Co., p.
20 (online)

Dr. Israel, Rabbi of Temple Beth Zion, offers the free use of the Temple on Sundays until the church
can be rebuilt

1890 - Church -- designed by Robert W. Gibson -- reconstructed.
Gibson uses stone instead of wood for structural parts, retaining the original walls and introducing minor
changes to the exterior, but making the interior more substantial, spacious, and ornamental.
Gibson was born in England in 1854. Trained at the Royal Academy of Art in London, he came the United
States in 1881 and set up as a practicing architect in Albany.

1987 - The Cathedral is designated a National Historic Landmark
This designation is the highest a humanly made structure, a significant place, or an archeological
site can achieve in the United States.

1988 - The Cathedral interior is redecorated and new lighting installed; the chancel organ is rebuilt