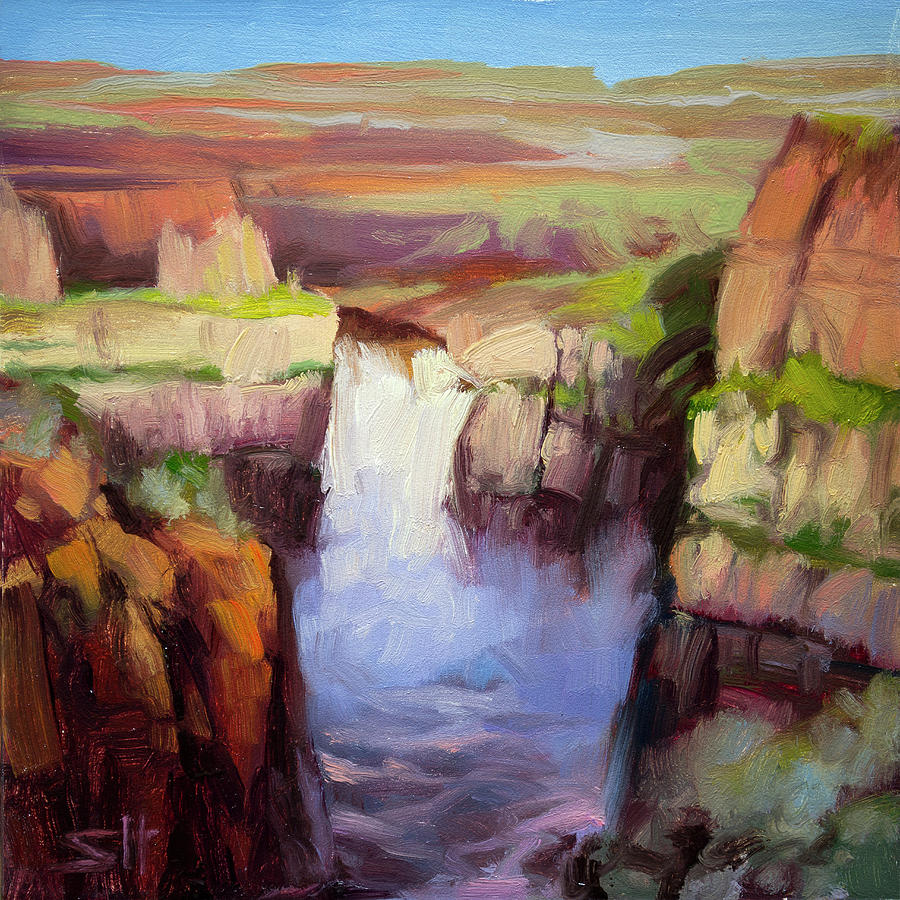 Palouse Falls, an incredible roaring, majestic outpouring of water over cliffs, is Washington State’s official waterfall. But it didn’t need official state sanction to be what it is: a unique, beautiful, astounding display of nature’s power.

Spring at Palouse Falls, the artwork, takes the viewer to this geological wonder at one of its most impressive times – early spring, when the winter snow melt is swelling the rivers and springs, resulting in a cascading wall of water that is monolithic in scope.

The viewer of the painting stands at a point just below the falls, between the red rock canyon that is something we would expect to find in the U.S. Northwest, but is very much evident in secluded, secret spots of the Pacific Northwest. The water cascading down the falls is white, massive, almost angry in its movement and quantity, and one becomes very aware that nature – when she sets out to be grand and powerful and strong – is not something to argue with.

It is for this reason that visitors to Palouse Falls need to use extreme caution in hiking around the area. While there are many paths, they are also treacherous, and a step too close to the edge has led to serious injury, and death, to hikers through the years. It is a somber reminder to us that, though we humans are intelligent, creative beings who do many incredible things, we are not infallible.

Step into the world of Spring at Palouse Falls, listen to the roar of the water as it falls over the cliffs, and take a break from the noisy world of commerce and phones and business meetings and traffic.

Wow this is amazing!!

Rustic with the feeling of natures power well presented!

I need to visit this place some day. Wonderful work as always Steve.

Wonderful color- the rich colors of the West!

A special thank you to the recent buyer from Oregon: may this artwork bring to you and your home that sense of awesome majesty felt when standing before Palouse Falls during its spring rush. Enjoy!

Before I read the description, I thought to myself, "This reminds of the falls I visited in Washington State back in 2002.' And as it turns out, so they are!!