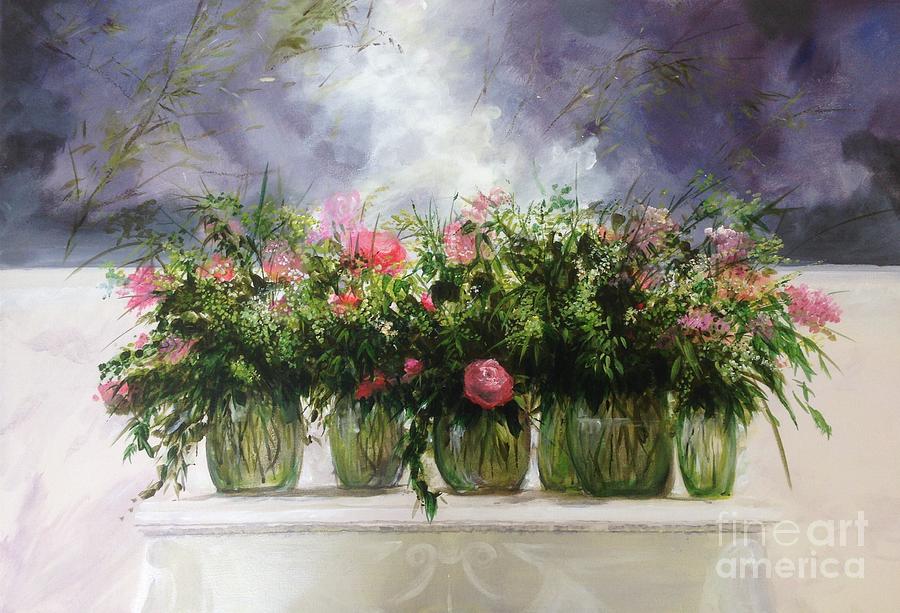 Painting - Acrylic And Oil On Canvas

A collection of green glass vases and bottles are packed onto the white marble mantlepiece, then filled with lots of leafy foliage, and flowers, once again the idea is to create the live inspiration for a mural, partly painted behind. The foreground is the inspiration for the background.

This is once again a 'scene / staged inspirational space in an artist's gallery, in order to paint the Mural which we can see behind...... It is enchanting, the Atelier... I am after one such place myself....

Wow! You have a beautiful gallery! Such gorgeous paintings! L/F

Hi Patty, thank you so much!

Thanks so much Laurel. Very much appreciate your comments .

thanks so much Lori, I m so grateful -

Congratulations Lizzy, your outstanding artwork has been featured on the leading page of “Impressionism” group! Feel free to add it to the featured art archive and the catalogs in the group’s discussions. Excellent work! Lori

Thanks so much Lori - I really appreciate being featured in Impressionism Group... :-) wishing you the best, always

thanks so much -gosh I m so overdue with this thank you..... I hadn't seen the message - have a Merry Christmas lizzy

Thanks so much dear Lyric, really appreciate it and it s so encouraging - keeps me working hard! x have a lovely day. Lizzy

thank you so much Sharon for your much appreciated visit and words of encouragement! x :--)

Lizzy! So beautiful and elegant. I love it!!! Congratulations, for your lovely work being SHOWCASED in Female Artists- Art Group!!! Well done!!! 💕Janet

Thanks very much Janet much appreciate your words of encouragement! :-) x

Congratulations, your wonderful work is SHOWCASED in Female Artists - December 10-16, 2017.

apologies for this late late thank you... I now understand how this works.. being featured, posting on the discussion etc., Much appreciate your support and having the work showcased in Female Artists

Thanks so much RC - really appreciate it!

Thanks to you all for featuring the work in your groups!

Thank you so much Jasna! have a nice day x

Thanks so much John, really appreciate having work featured in your fabulous group 'images that excite you'! best, :-)