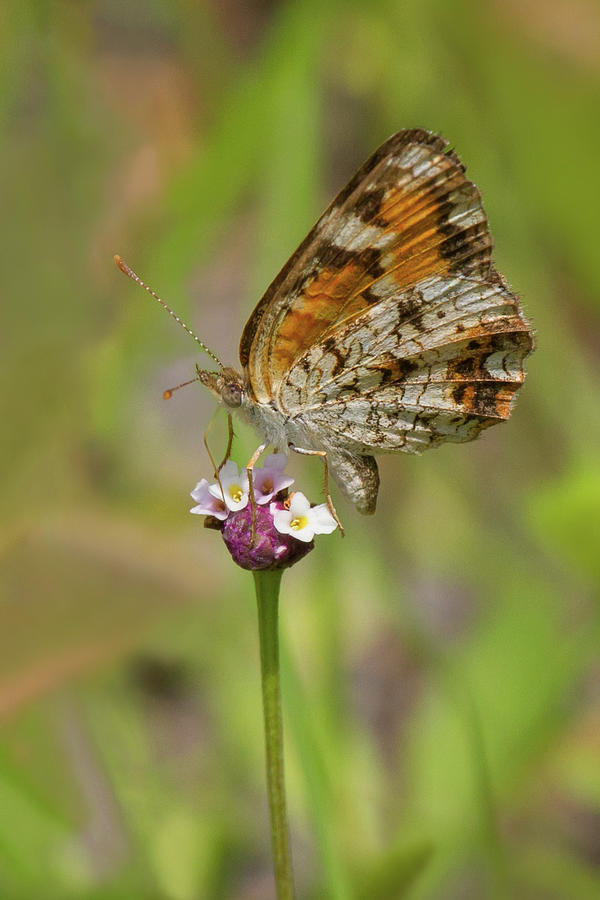 A phaon crescent butterfly - Phyciodes phaon- perched on and feeding upon fogfruit flowers - Phyla nodiflora - with wings held upright. Along a sand road through the pine flatwoods of Tiger Bay State Forest in Florida.

This image has been featured in the following groups:
500 Views -1 Image a Day,
Butterflies are Forever,
Florida-The Beautiful Sunshine State
& The World We See Group

Phaon crescent butterflies can be found flying at any time of year throughout Florida in various disturbed areas such as roadsides, vacant lots, canal banks and utility corridors, often in close association with the larval host plant, turkey tangle fogfruit. The range includes much of the south central United States as far north as Missouri and northwest into eastern Colorado. Found through much of the southeastern coastal plain and west in the U.S.-Mexico boarder region, south into Mexico to Guatemala and also in Cuba.
The wingspan of the Phaon crescent is from 2.5-3.8cm (1 to 1-1/2 in.). The forewing is orange with a black border and lines, and a pale cream to yellowish median band. The underside of the hindwing is cream to yellowish with brown markings, with the winter form showing more brown.
Turkey tangle fogfruit is a common wildflower of beaches, hammocks and disturbed sites throughout most of Florida. The range extends through the southeastern coastal plain as far north as Pennsylvania and New Jersey and westward across the southern tier of states. Also occurrs in Oklahoma, Kansas, Oregon, Hawaii, Puerto Rico and the Virgin Islands.
Turkey tangle fogfruit has tiny purplish-white flowers in rounded clusters that become cylindrical with age on long stalks. The corolla is two-lipped, the upper lip with two lobes, the lower three-lobed. Leaves of Phyla nodiflora are opposite, stalked, obovate or spatulate, widest above the middle, toothed near the tip, with a tapered base.
This low-growing wildflower has many common names, going by both fogfruit and frog-fruit, plus capeweed and carpetweed - alluding to the tendency to grow in large patches.
(Subject description from the artist's Wild Florida Photo website www.wildflphoto.com)

Congratulations for your feature in our group, Florida-The Beautiful Sunshine State