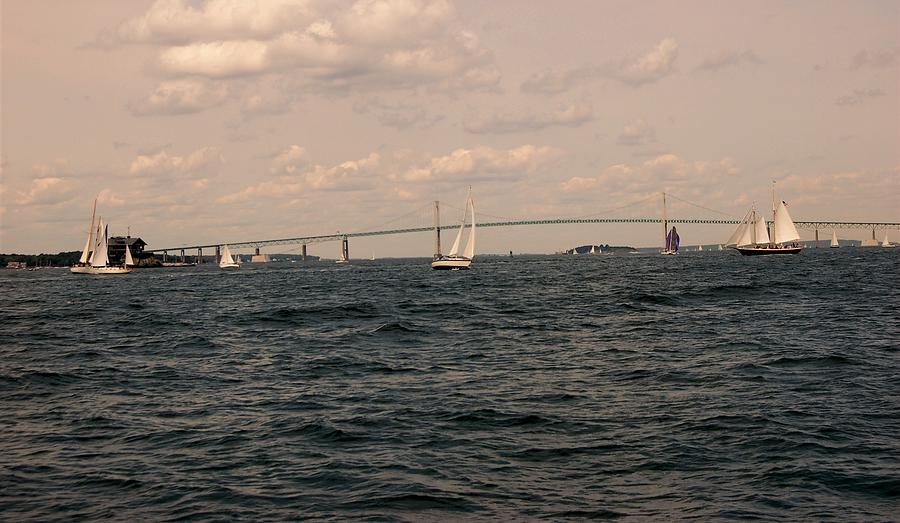 Newport is a seaside city on Aquidneck Island. It is located in Narragansett Bay approximately 33 miles (53 km) southeast of Providence, Rhode Island, 20 miles (32 km) south of Fall River, Massachusetts, 74 miles (119 km) south of Boston, and 180 miles (290 km) northeast of New York City. It is known as a New England summer resort and is famous for its historic mansions and its rich sailing history. It was the location of the first U.S. Open tournaments in both tennis and golf, as well as every challenge to the America's Cup between 1930 and 1983. It is also the home of Salve Regina University and Naval Station Newport, which houses the United States Naval War College, the Naval Undersea Warfare Center, and an important Navy training center. It was a major 18th-century port city and also contains a high number of buildings from the Colonial era.
The city is the county seat of Newport County, which has no governmental functions other than court administrative and sheriff corrections boundaries. It was known for being the location of the "Summer White Houses" during the administrations of Presidents Dwight D. Eisenhower and John F. Kennedy. The population was 24,672 as of 2010.
Newport was founded in 1639 on Aquidneck Island, which was called Rhode Island at the time. Its eight founders and first officers were Nicholas Easton, William Coddington, John Clarke, John Coggeshall, William Brenton, Jeremy Clark, Thomas Hazard, and Henry Bull. Many of these people had been part of the settlement at Portsmouth, along with Anne Hutchinson and her followers. They separated within a year of that settlement, however, and Coddington and others began the settlement of Newport on the southern side of the island.

Newport grew to be the largest of the four original settlements which became the Colony of Rhode Island and Providence Plantations, which also included Providence Plantations and Shawomett. Many of the first colonists in Newport became Baptists, and the second Baptist congregation in Rhode Island was formed in 1640 under the leadership of John Clarke. In 1658, a group of Jews were welcomed to settle in Newport; they were fleeing the Inquisition in Spain and Portugal but had not been permitted to settle elsewhere. The Newport congregation is now referred to as Congregation Jeshuat Israel and is the second-oldest Jewish congregation in the United States. It meets in Touro Synagogue, the oldest synagogue in the United States.
The Colony of Rhode Island and Providence Plantations received its royal charter in 1663, and Benedict Arnold was elected as its first governor at Newport. The Old Colony House served as a seat of Rhode Island's government upon its completion in 1741 at the head of Washington Square, until the current Rhode Island State House in Providence was completed in 1904 and Providence became the state's sole capital city. Newport became the most important port in colonial Rhode Island, and a public school was established in 1640.

Great image of the bay!

Love the sailboat leaning into the wind.

Thank you very much Jeff for the feature in the Whats New group......it is greatly appreciated

Nothing better than a day at sea, I love this

Thank you very much Jenny for the feature in the No Place Like Home group.....it is greatly appreciated

Thank you very much Cathy for the feature in the Monthly Themed group.....it is greatly appreciated

Yes they do....I have sailed from the Chesapeake Bay directly to the BVI which is a 12 day sail!!! Thank you Kay....

Thank you very much Cathy for the feature in the Atet Anything Transportation group......it is greatly appreciated

Congratulations! Your fantastic art has been featured on the Home Page of the ABC GROUP from the W IS FOR WHAT'S NEW themed week, MAY 4 - MAY 11, 42020. You are invited to add your wonderful art to the Features Archive Discussion in the ABC GROUP.

Thank you very much Pamela...it is greatly appreciated

Lovely view of Newport and dreams of summer!

HI, NICE TO MEET YOU ! im Ms, Fanaka Cadassi, 41YRS, separate, liveing in [Turkey]. im just being true to myself and i want real and true love no to waste. in short no time for games. Here's my email address. (fanaka-cadassi@hotmail.com) Please contact me directly.i will send you my pictures. beside there is something very important i will like to tell you when you contact me on my email address here i will respond to you.waiting to hear from you. Fanaka.