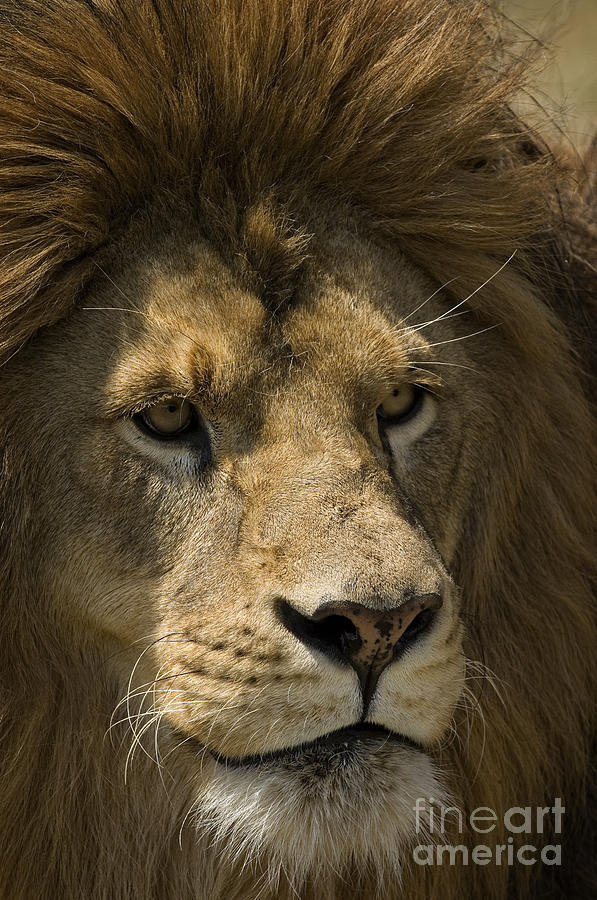 This image is for sale at
http://licensing.pixels.com
/profiles/wildlife-fineart.html Thank you !
The lion is quite social unlike the other members of the big cat family. Approximately 10 to 15 lions will live together in a group also known as a pride. Of these members, five to ten of the members will be females accompanied by their young. Only two to three lions within a pride will be males who are either brothers or pride-mates. The lions social tendencies can also be seen in its actions; a lion will often play, groom and lay with other lions in obvious displays of affection.
Lions are lazy. Lions are represented to be powerful, majestic creatures who spend much of their day hunting and guarding their territory. However, contrary to this popular believe, lions are actually the most lethargic of the big cat family and spend most of their day relaxing and sleeping with their pride. On average, a lion will spend between 16 and 20 hours resting!
The lion (Panthera leo) is one of the four big cats in the genus Panthera and a member of the family Felidae. With some males exceeding 250 kg (550 lbs.) in weight, it is the second-largest living cat after the tiger. Wild lions currently exist in sub-Saharan Africa and in Asia (where an endangered remnant population resides in Gir Forest National Park in India) while other types of lions have disappeared from North Africa and Southwest Asia in historic times. Until the late Pleistocene, about 10,000 years ago, the lion was the most widespread large land mammal after humans. They were found in most of Africa, across Eurasia from western Europe to India, and in the Americas from the Yukon to Peru.[5] The lion is a vulnerable species, having seen a major population decline of 30 to 50% over the past two decades[date missing] in its African range. Lion populations are untenable outside designated reserves and national parks. Although the cause of the decline is not fully understood, habitat loss and conflicts with humans are currently the greatest causes of concern.
Notice when ordered the fine art america watermark in the bottom left hand corner will not be on the Photography.
All images are copyrighted Wildlife-FineArt. All Rights Reserved. Copying and/or distributing these images
without my permission is strictly prohibited. Any unauthorized usage will be prosecuted to the full extent of U.S. Copyright Law.

Thank you very much Juli !