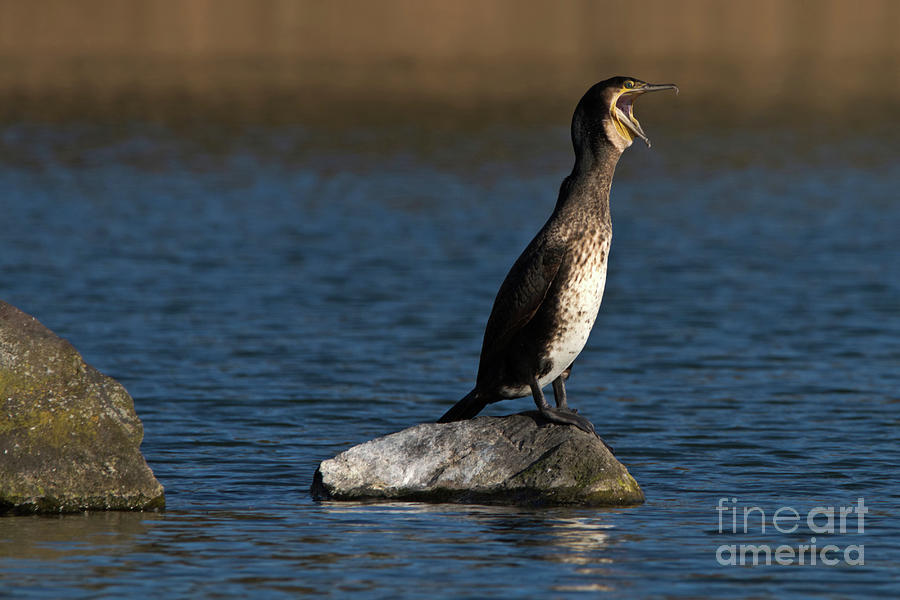 Cormorant seemingly laughing with beak wide open perched on a rock in a lake,
Cormorants in a small group resting but still wary a large and conspicuous water bird, the cormorant has an almost primitive appearance with its long neck making it appear reptilian. It is often seen standing with its wings held out to dry. Regarded by some as black, sinister and greedy, cormorants are supreme fishers which can bring them into conflict with anglers and they have been persecuted in the past. The UK holds internationally important wintering numbers. There are two species of the cormorant family which occur in the UK: the cormorant and the shag. They can be tricky to tell apart, especially in the case of young birds.
The cormorant has a stouter, more powerful beak than the shag. The angle of its forehead where it joins the beak is shallower and the yellow skin around the face is more extensive. Cormorants can be found either on the coast or at inland waters, where there are some large breeding colonies.
Shags are birds of the coast. Occasionally, they turn up inland along rivers and lakes, but usually alone (cormorants are often seen in groups inland). The shag's beak is more delicate in comparison to the cormorant's and the forehead angle is steeper. Young birds sometimes show the hint of the adult bird's crest.