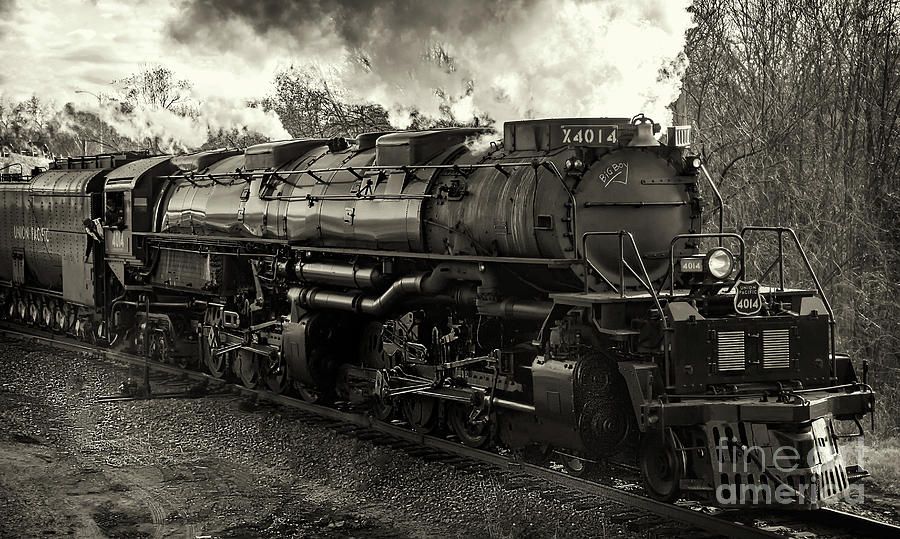 The Union Pacific UP 4014 "Big Boy" on the 150th anniversary tour of the transcontinental railroad. The steam locomotive heads out of Osawatomie KS for its next stop in Kansas City MO. The 4014 is one in operation of twenty-five Big Boys that were built exclusively for Union Pacific Railroad, the first of which was delivered in 1941. The locomotives were 132 feet long and weighed 1.2 million pounds. Because of their great length, the frames of the Big Boys were "hinged," or articulated, to allow them to negotiate curves. They had a 4-8-8-4 wheel arrangement, which meant they had four wheels on the leading set of "pilot" wheels which guided the engine, eight drivers, another set of eight drivers, and four wheels following which supported the rear of the locomotive. The massive engines normally operated between Ogden, Utah, and Cheyenne, Wyo.

Please Note: The FAA watermark does not appear on print or products.

Congratulations! Your fantastic photographic art has been chosen as a Camera Art Group feature! You are invited to archive your work in

Congratulations your wonderful image has been featured on the homepage of ATET*Transportation! Please archive your image on the discussion board!

congratulations on your recent sale!

Congratulations, on your feature, in "No Place Like Home", "Auto And Other Motor Vehicles with Wheels", & "Art District", groups!