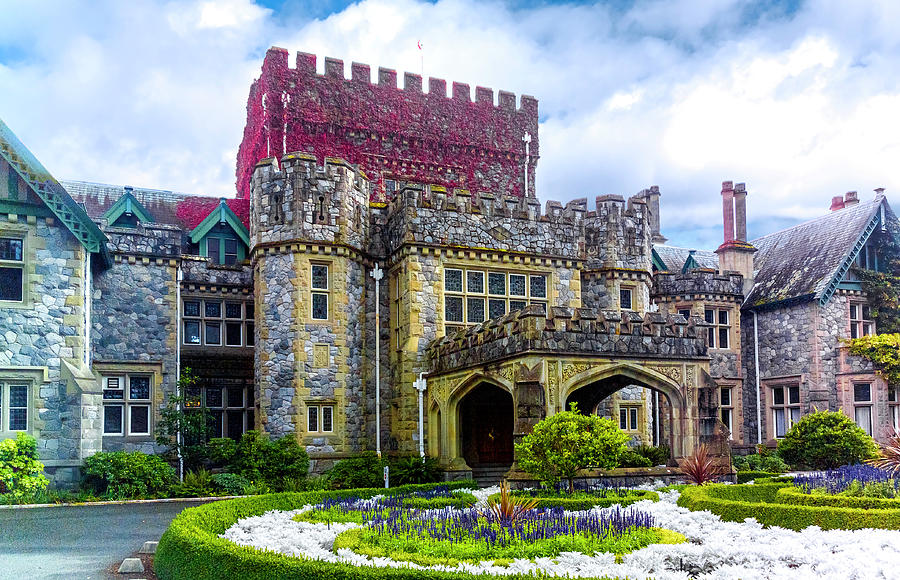 In 1908, prominent architect Samuel Maclure was hired by James and Laura Dunsmuir to design their family retirement home, Hatley Castle. Maclure�s task was to design and construct a home that would serve both James and Laura's needs. James wanted the exterior to look like a medieval castle that would be a refuge from the business world; where he could spend time fishing, hunting and playing the role of a gentleman farmer. Laura wanted the inside to be like Government House where she could entertain and accommodate her large family and staff. In just 18 months, the results of Maclure�s dedicated work was a 200�x86�x82� masterpiece featuring a Norman tower with two Tudor‐revival wings on either side. On May 1st, 1910 the Dunsmuirs officially moved in to Hatley Castle, then the largest private residence on the west coast.

The portico‐like structure at the building�s main entrance is called the Porte‐coch�re meaning carriage door or carriage‐porch. This provided access for a horse and carriage or motor vehicle to pass, in order for the occupants to alight under cover, protected from the weather. The stepping stones across from the oak double‐doors are used for getting on and off a horse.

The main doors are made of oak with brass door handles featuring Scottish rampant lions. The stone carving above the door features James Dunsmuir�s initials surrounded by Scottish thistle. The medieval busts on either side of the door indicate the gender distinction of the first floor�s east and west wings � east meant ladies� wing, west meant men�s wing. The bronze doorbell figure has a definite Art Nouveau influence.

As one enters, the Grand Hall is Elizabethan, or Tudor Revival, in style, featuring half‐paneled/half‐plaster walls, vaulted ceilings, heavy oak beams and a 'pointed arches' pattern which runs up and down the banisters, across the minstrel gallery, and above the stairwells. The stone fireplace is carved from rose‐colored sandstone brought from Flagstaff, Arizona. It is the first of seven wood‐burning fireplaces found on the castle�s first floor; all of which are designed to be inefficient � because the building is actually heated by a steam‐based central heating system.

The drawing room - Greek Revival - was where Laura Dunsmuir entertained her society friends. The room is 1200 square feet with 16‐foot ceilings; �the size of a modest three‐bedroom home.�

Two sets of double French doors lead out to the terrace where one overlooks the spectacular view of the grounds, Esquimalt Lagoon, the Straits of San Juan de Fuca, and the Olympic Mountains.

When the family moved into the house in 1910, only six of ten children were still living at home; the four older children were already married. The four east wing bedrooms were children�s rooms, as was one of the west wing rooms; the four remaining west wing rooms were three guest rooms and a dressing room. All the children�s bedrooms had sculptured ceilings and lovely views of the gardens and the lagoon.

I love those colors!