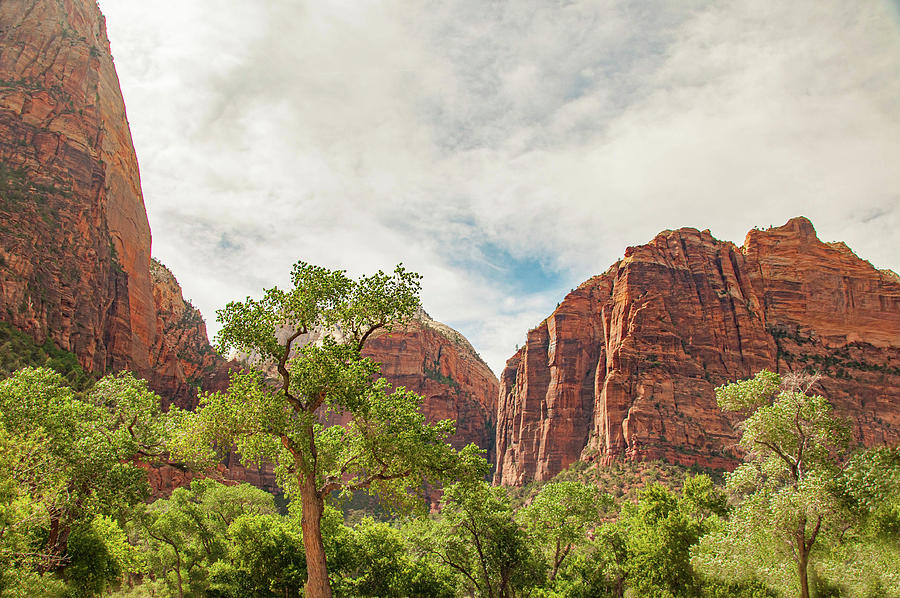 Soon after entering Zion National Park one can hike on any number of beautiful trails. This image was captured just before crossing the river on one of those trails. The colour palette was simply stunning with the trees standing tall against the backdrop of the amazing rock formations that Zion is famed for.

Bryce Canyon is only 50 miles away, so should you plan a visit, you'll see two of the best National Parks in Utah.

The town of Springdale is a short distance away near the entrance to the park. Its population was 529 at the 2010 census and it is oriented around the tourist industry visiting Zion National Park. It was originally settled as a Mormon farming community in 1862 by evacuees from the flooding of nearby Northrop. Springdale was named one of the 20 'prettiest towns' in the United States by Forbes Traveler in 2008.

Zion National Park is an American national park located in southwestern Utah near the town of Springdale. A prominent feature of the 229-square-mile (590 sq km) park is Zion Canyon, which is 15 miles (24 km) long and up to 2,640 ft (800 m) deep.

The canyon walls are reddish and tan-colored Navajo Sandstone eroded by the North Fork of the Virgin River. The lowest point in the park is 3,666 ft (1,117 m) at Coalpits Wash and the highest peak is 8,726 ft (2,660 m) at Horse Ranch Mountain. Located at the junction of the Colorado Plateau, Great Basin, and Mojave Desert regions, the park has a unique geography and a variety of life zones that allow for unusual plant and animal diversity. Numerous plant species as well as 289 species of birds, 75 mammals (including 19 species of bat), and 32 reptiles inhabit the park's four life zones: desert, riparian, woodland, and coniferous forest. Zion National Park includes mountains, canyons, buttes, mesas, monoliths, rivers, slot canyons, and natural arches.