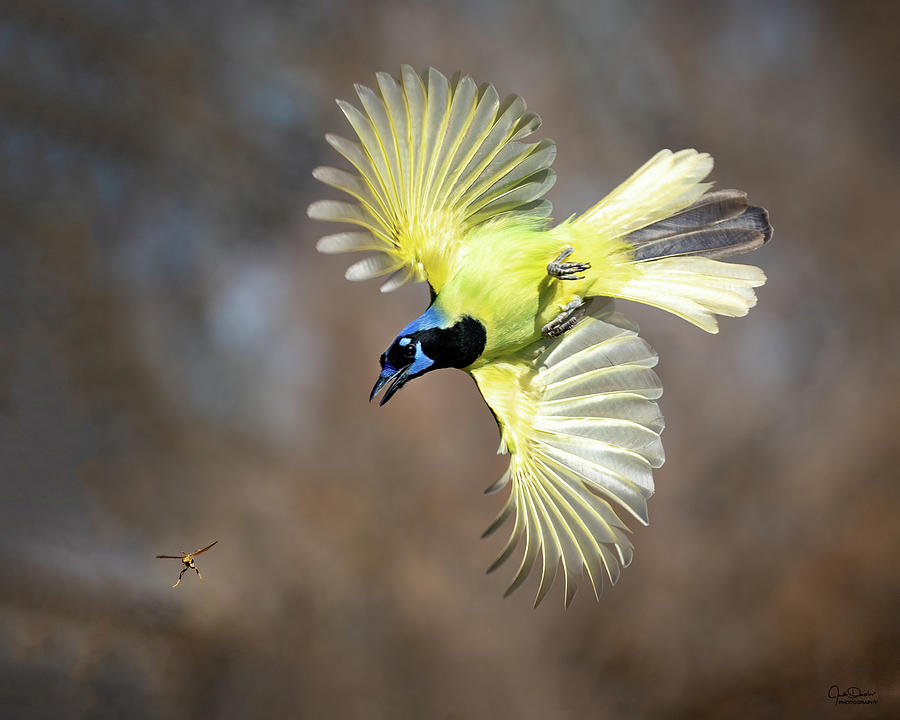 This beautiful Green Jay was darting about, but it wasn't until I got home and looked at my photos on my computer that I saw the bug he had been chasing! That wasp was a tasty lunch, I bet. I love how intent the jay looks on catching his prey!

A brilliant green, yellow, and blue jay of the tropics, the Green Jay enters our US only in southern Texas. The birds travel in conspicuous family flocks through brushlands and forests, seeking insects, small vertebrates, and fruit to eat. Like other jays and crows, this species is an incredibly versatile forager equally comfortable at picking, gleaning, pouncing, and even flycatching. During the breeding season, from April through June, these garrulous birds settle down and become a bit quieter. Green Jays live in pairs or social groups at all seasons, communicating with each other with a bizarre variety of different calls.

WOW, this is a spectacular in-flight capture of both the Jay and the wasp.

Such a fabulous image! Not sure if I've seen this one before.

Congratulations on your top finish in the Your One Favorite Piece Of Wildlife Artwork contest! VLF

Congratulations on your well deserved win

Revisiting this awesome photograph, Judi, congratulations on your top finish in the YOUR ONE FAVORITE PIECE OF WILDLIFE contest! v

Congratulations on your 2nd place win in the FAVORITE PIECE OF WILDLIFE ARTWORK contest!

This is an amazing image Judi. It is an honor for my image to be voted sids by side with this image.

Outstanding composition, lighting, shading, color and artwork! F/L … voted for this piece in the BIRDS contest!

Thanks so much, Gary!

Great capture! This photo/art has been featured on GYA group's home page.

Thanks so much for the feature, Nelly!

Thank you so much, Maili!

Amazingly seen and captured image!! WoW!! I've been to Texas but have never seen one till now. Thanks for sharing and stay safe!!

Tony, appreciate the comment very much! FYI, green jays are only seen in southern Texas or further south.

Thanks so much, Lois!

This is such a fantastic image / capture. Congrats on your feature in Art in Innovation!

Thanks a lot, Marilyn!

Wow! What a shot! Fabulous timing!

Thanks a lot, Stephen!

This is an absolutely stunning action shot! Such a perfectly framed closeup of the bird and his prey, the detail of the outspread wings, the shadows of the feet, all contribute to an outstanding photograph! Brava!! L/F

Thank you so much for that lovely comment, Lori! :)

Thanks so much, Teresa!

WOW, What an Amazing Photograph!!

Thanks so much, Robert!

Love the action and capture!

Thanks a lot, Art!

Judi, congrats on the special feature in the Go Take a Hike group of this amazing image

Thank you so much for the special feature, Larry -- I really appreciate it!

Judi, this is spectacular! Congratulations on your well deserved Dawn's Delight recognition in Wild Birds of the World group!!

Outstanding capture!! Congrats on your "Dawn's Delight" and Feature in Wild Birds Of The World. Well deserved!

Thanks a lot, Larry!