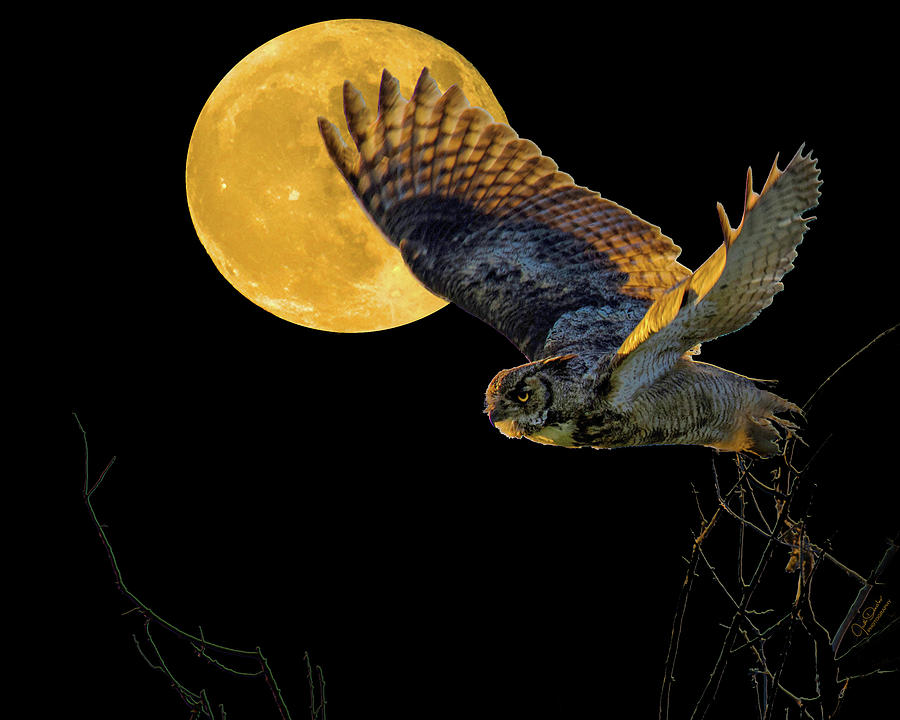 A Great Horned Owl flies in front of the full moon in the dark of night. It could be Halloween, or it might be any night of the year, when a nocturnal owl such as the Great Horned is out hunting. They fly silently and surprise their prey by using their excellent hearing.

This image is a composite of the moon and the owl, both are my photos.

Great horned Owls (sometimes known by nicknames such as "tiger owl") are large owls native to the Americas, where their deep hoots may be heard across distances, especially in the winter when they begin thinking about nesting. This owl is an extremely adaptable bird with a vast range and is the most widely distributed true owl in the Americas. Great horned Owls typically nest in large trees but will also nest along bridges and other buildings, or even on the ground. They usually adopt a nest that was built by another species, but they also use cavities in live trees, dead snags, deserted buildings, cliff ledges, and human-made platforms. Pairs may roost together near the future nest site for several months before laying eggs. Aggressive and powerful in their hunting, they will take prey as varied as rabbits, hawks, snakes, and even skunks, and will even attack porcupines, often with fatal results for both prey and predator.

Photo of the owl taken on September 28, 2016, in Louisville, Colorado.

Congratulations on your feature in A Birding Group - Wings. FL

Revisiting this beautiful composition! Congratulations on your feature in Don's "A Birding Group - Wings"! F/L

this is fabulous artwork. L/F

Congratulations on your winning 1st Place in the contest… OWLS AT HALOWEEN! F/L

Congratulations, Judi, on your 1st Place Win in the Owls at Halloween Contest. What a stunning photograph! Well done.

Congratulations on your tie for 3d place in the Halloween Digital Art contest! l/f

Incredible, Judi! (and especially perfect for this time of year).The gold light of the moon flowing over the owl's wings is stunning. (Have you ever considered applying for the Caribou Ranch artist residency? You would be a perfect fit.) like/f

Thank you so much, Anne! You know, I've thought of applying for the Caribou Ranch artist residency. You've done it and won, I believe, right?

Thanks so much, Lynn!

Stunning composite photograph of a Great Horned Owl in flight in the moonlight, with a great composition, Judi! F/L

Thanks a lot, Kathy!

This is so amazing! Love it! Shared/Pin