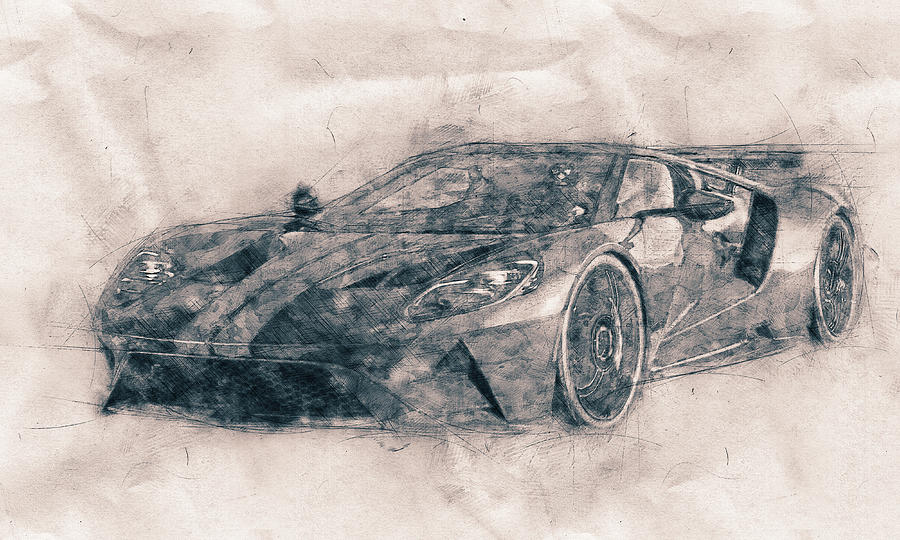 Ford GT40 - Sports Car - Racing Car - 1966s - Automotive Art - Car Posters
Garage Art, Buy art online, Auto poster
The Ford GT40 is a high-performance endurance racing car based on the British Lola Mk6, with the Mk I, Mk II, and Mk III designed and built in England and the Mk IV built in the United States. The range was powered by a series of American-built engines modified for racing. The GT40 won the 24 Hours of Le Mans four consecutive times, from 1966 to 1969 (1966 being the Mk II, 1967 the Mk IV, and 1968-1969 the oldest chassis design, the Mk I), including a 1-2-3 finish in 1966. In 1966, with Henry Ford II personally in attendance at Le Mans, the Mk II GT40 provided Ford with the first overall Le Mans victory for an American manufacturer, and the first victory for an American manufacturer at a major European race since Jimmy MurphyÂ´s triumph with Duesenberg at the 1921 French Grand Prix. The Mk IV GT40 that won Le Mans in 1967 is the only car designed and built entirely in the United States to achieve the overall win at Le Mans.
The GT40 was originally produced to win long-distance sports car races against Ferrari (who won at Le Mans six times in a row from 1960 to 1965). Ford/Shelby chassis #P-1075, which won in 1968 and 1969, is the first car in Le Mans history to win the race more than once, using the same chassis. Using an American Ford V-8 engine, originally of 4.7-liter displacement capacity (289 cubic inches), it was later enlarged to the 4.9-liter engine (302 cubic inches), with custom designed alloy Gurney-Weslake cylinder heads. The car was named the GT (for Grand Touring) with the 40 representing its overall height of 40 inches (1.02 m, measured at the windshield) as required by the rules. Large-displacement Ford V8 engines (4.2-liter, 4.7-liter and 7-liter) were used, compared with the Ferrari V12, which displaced 3.0 liters or 4.0 liters.