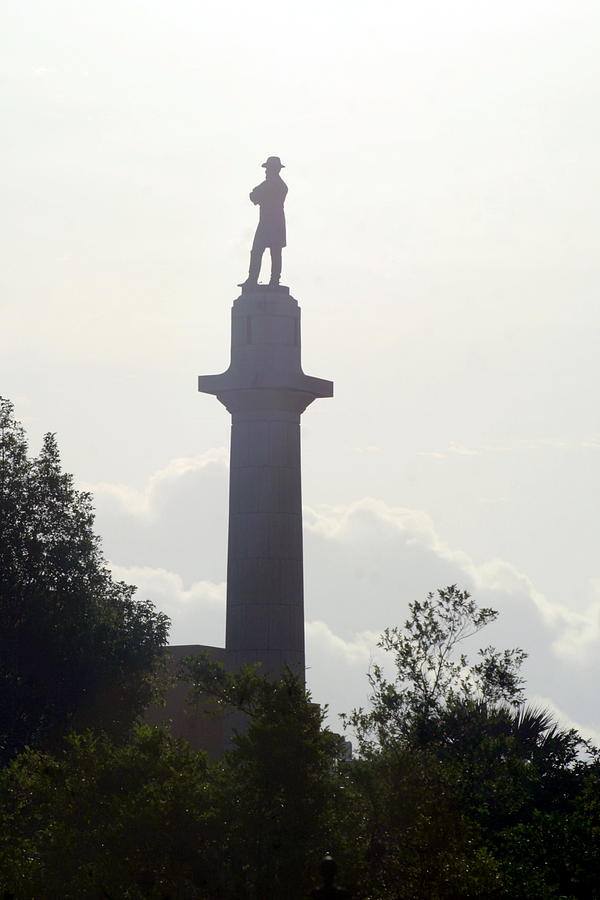 The Rise And Fall Of Confederate Statues In New Orleans, this photo one of a series, The statue of General Robert E. Lee washed out form the early morning haze, exhaust from the large equipment and sunlight.

The title of a soon to be released photo documentation of the four confederate statues now removed from public viewing. The collectors book will contain historic images from the New Orleans Archival Collection Museum along with images of my 57 years prior and post with historic documented dialog. All photographs, book title, along with excerpts copyright by Michael Hoard 2017. All Rights Reserved The future book will be found on Amazon as well copies auctioned along with photographs on E-Bay for sale.

The historic event Friday May 19, 2017 was attend by a very small crowds, the statue including all others had never really been photographed before and after now becoming places of interest to photograph.

The statue of General Robert E. Lee was the most difficult last of the four statues to be removed which was located at Lee Circle. The monument towers close to 80 feet overlooking New Orleans. The mayor had decided to keep the pedestal intact which the bronze statue stood upon.

Personal photographer notes: Having been at the site covering all events leading up to the removal on eve of the removal documented all the protestors and remained til 4 am Friday morning. I was interviewed off air and await news if I will become a featured segment and my documentation of the statue of General Robert E. Lee photographs being part of my 57 years personal private collection by a photographer. Upon my demise my current 57 year collection of photographs will become a permanent collection for research at The New Orleans Historic Collection.

As the police were securing the area and moving the demonstrators a block radius away in all directions in preparation of the monumental task and the removal of the statue. I went home slept for two hours, and returned to the scene at 7 am Friday morning. There were only a hand full of photographers and residents of New Orleans. I took many images from 7 to 8 from all angles then proceeded to the coffee shop near by. I returned to the monument at 11 am and remained til I went to the Mayors conference which was by invitation only.

Present for dignitaries, homeland security director, police chief and so many others in business attire jacket and tie. I did get to speak personal with the mayor and thanked him for allowing the pedestal to remain at the site. The pedestal is part of the monument and should have been dismantled as well. The mayor did get the opportunity to see my photograph of the solstice the only image and others taken over the 37 years which had remained private. I always took photos of the monument not from a political perspective but from an artist and photographers perspective.

I had attempted to organize what would be the first public festival as so many in New Orleans kick off with the solstice which occurs at the monument site. I looked at the Mayor face to face I said Mr. Mayor what does New Orleans, New York, the Mayan pyramids and Stonehenge all have in common his eyebrows raised and asked? I have no clue at all, when I turned my lap top around to reveal the celestial event which takes place at the other places and New Orleans he was quite amazed at the beauty of my photograph, The Solstice of General Robert E. Lee. Perhaps for the 300th anniversary of New Orleans next year, the new festival will be organized and named The New Orleans Solstice Festival and individuals will visit the city as they do at the other locations for other celestial events .

On Friday evening the alignment of earth axis the solstice not quite lined up, I captured the monument and the sun pierced through the west and east windows located directly under the statue. The pedestal column does have stairs leading to the top. The site of the monument will have a water themed and art installations.

The site of the Jefferson Davis monument an American flag pole will be installed.]]

The General Beauregard monument plans are undecided. That site it was discovered, the land was not owned by the city but owned by The City Park Commission a entity which the city does not have control of. City park which is a city park with one of the largest plantings of Live Oak trees and also the site of The Museum Of New Orleans Fine Art, known for short NOMA.. The courts withheld the last minute attempt to stop the removal of that monument. It will be moved to the Gulf Coast and become part of the once home of General Beauregard with bronze plaque and explanations. The site of the first monument to be removed will received no recognition, that particular monument being the most notorious of them. The White Supremacist Monument the most controversy of all the four statues. All the statues removed were taken down during the night hours not to disrupted traffic flow or what city officials thought would turn into a volatile situation. Because of numerous death threats to all involved with the removal the city kept the dates and times secret. All working with the removal wore bullet proof vest and their identity kept covered and wore hard hats.

On Friday May, 19th after a full day of careful removing of the statue it was pulled upwards secured with lanyards securely wrapped around the statue 6:03 pm. a historic and monument event in New Orleans history across America and around the world.

As a artist and photographer, I needed to document all the events from all perspectives the citizens for the removal and the citizens in protest. Personal, I can now take a deep breath of relief its over. As a photographer I did place myself in potential danger, I now review the thousand of images taken during the four historic events which occurred here in New Orleans. My physical body has yet to return to normal mental and physical state of mind, but now the process of editing the images which will be included in the future book release "The Rise And Fall Of Confederate Statues In New Orleans.

Greetings Many Ann thank you so much for the feature of Final Sunrise Of General Robert E. Lee Monument The Rise and Fall of Confederate Statues In New Orleans in the group Cloud Formations, Sky Activity, I sure appreciate this, Cheers, Michael Hoard

Congratulations! Your wonderful image has been featured in the Fine Art America Group: “Cloud Formations—Sky Activity—and Eternal Horizons”! You are invited to archive your featured image for long-term storage and for viewing on the Discussions Page: “Featured Images Archive” theme. Simply copy your image’s Embed URL and paste it into the theme as noted above. Group URL: https://fineartamerica.com/groups/cloud-formations--sky-activity--and-eternal-horizons-.html

Greetings John, thank you so much for the feature of Final Sunrise Of General Robert E. Lee Monument The Rise And Fall Of Confederate Statues In New Orleans in the group Images That Excite You, Cheers, Michael Hoared