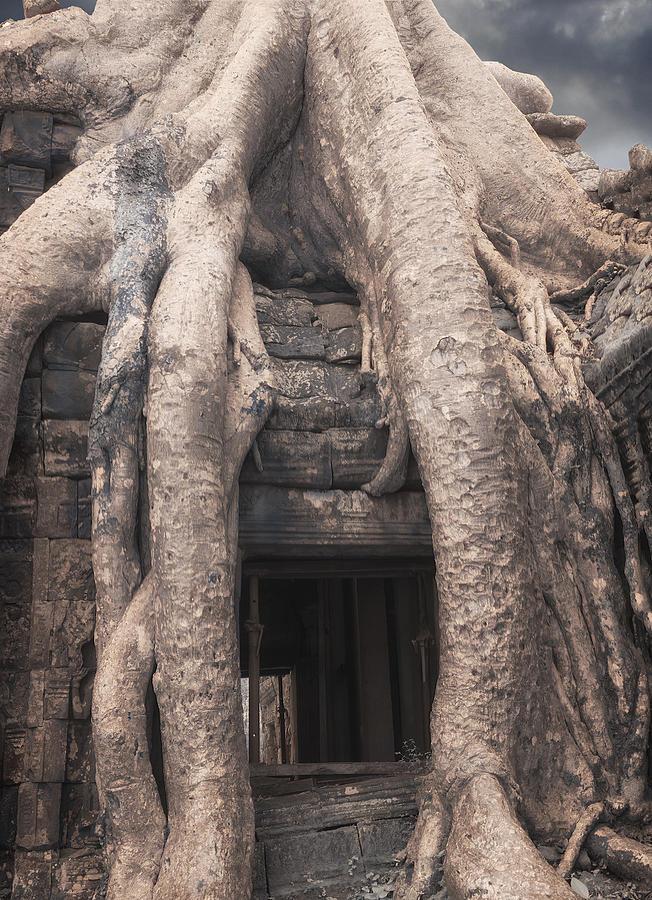 A silk-cotton tree reaches it's tentacles around a temple window in Ta Prohm, Angkor Wat.

Cambodia.Angkor Wat was built between A.D. 1113 and 1150, and encompasses an area of about 500 acres. It is one of the largest religious monuments ever constructed. Its name means temple city.

The city where the temple was built, Angkor, is located in modern day Cambodia and was once the capital of the Khmer Empire. The population may have been over 1 million people. It was easily the largest city in the world until the Industrial Revolution.

This city contains hundreds of temples. it was originally built as a Hindu temple dedicated to the god Vishnu. The god Vishnu is a stature or picture created from the minds of some people with hopes that it would protect them. It never did. It was a stone. So then then the temple was converted into a Buddhist temple in the 14th century. Buddhism was founded in the 4th or 5th B.C. in northern India by a man. His intention in founding Buddhism was to lead people to permanent liberation from suffering and find lasting peace.
Shot with infrared converted Canon 5D MK II and toned in photoshop.

Thank you for your visit and for considering my fine art works. Feel free to browse my artworks and galleries to find something that you would like for your home or office. You can select a print, greeting card, cell phone cover, tote bag, throw pillow or duvet cover. You can adjust the image so that it fits perfectly for each product. Your product is guaranteed to your satisfaction by Fine Art America. Please contact me if you have any questions. Also, I appreciate comments on the photos and social media support. Come back again as new images are being added with each trip.