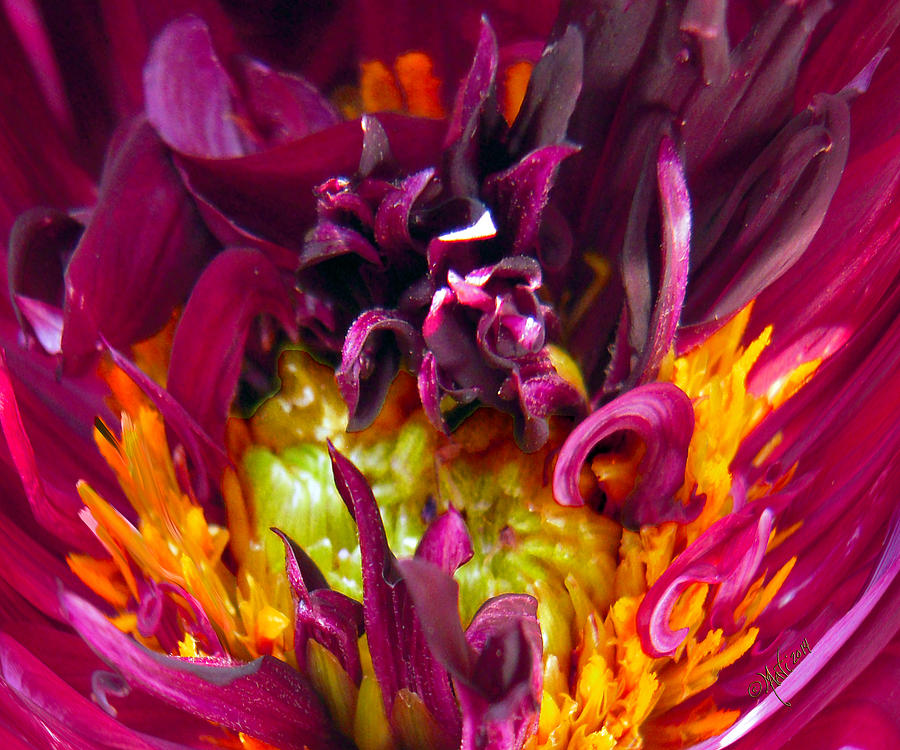 When you look closely into the center of a big flower like this incredibly colorful dahlia, you should feel a sense of wonder. Surely there are fairies lurking here. I am certain I see some resting under the curled petals comfortably out of view and filled with the delight of all the silky petals and colors that surround them.

Featured:
Images That Excite...09/30/2014
AAA Images 09/29/2014
World of Dahlias 10/01/2014
Images That Excite 09/30/2014
Women Who Run With The Wolves...10/04/2014
World of Dahlias 10/01/2014
The Awe Factor 10/21/2014
Dahlia (UK /deɪliə/ or US /dɑːliə/) is a genus of bushy, tuberous, herbaceous perennial plants native mainly in Mexico, but also Central America, and Colombia. A member of the Asteraceae (or Compositae), dicotyledonous plants, related species include the sunflower, daisy, chrysanthemum and zinnia. There are 42 species of dahlia, with hybrids commonly grown as garden plants. Flower forms are variable, with one head per stem; these can be as small as 2 in (5.1 cm) diameter or up to 1 ft (30 cm) ("dinner plate"). This great variety results from dahlias being octoploids�that is, they have eight sets of homologous chromosomes, whereas most plants have only two. In addition, dahlias also contain many transposons�genetic pieces that move from place to place upon an allele�which contributes to their manifesting such great diversity.

The stems are leafy, ranging in height from as low as 12 in (30 cm) to more than 6�8 ft (1.8�2.4 m). The majority of species do not produce scented flowers or cultivars. Like most plants that do not attract pollinating insects through scent, they are brightly colored, displaying most hues, with the exception of blue.

The dahlia was declared the national flower of Mexico in 1963. The tubers were grown as a food crop by the Aztecs, but this use largely died out after the Spanish Conquest. Attempts to introduce the tubers as a food crop in Europe were unsuccessful.

Totally eye catching piece Michele, the burst of color variations in this is outstanding!!

Thank you, Al.. I never get tired of looking at flowers, each one is incredible and some just off the charts beauty.

A magical swirl of vibrant color- love it!

Great to have you visit, Stephen!

i can stare at this for hours . love evrything about it

What an exciting image! Such vivid color!

Quite an explosion of color! It looks like it is on fire!

Thanks, Tony, I actually had that thought too! It is quite a vibrant flower, and I did not enhance it, that is the real color.. amazing!

Now Michele, you know the fairies are shy and won't let us see them until they are ready! What stunning colors. Love the curls and swirls of the petals. A wonderful fairy fantasyland!

Thank you, Karen.. I truly believe there must be fairies there. If I were a fairy, I would certainly hang in a palace like this.. LOL