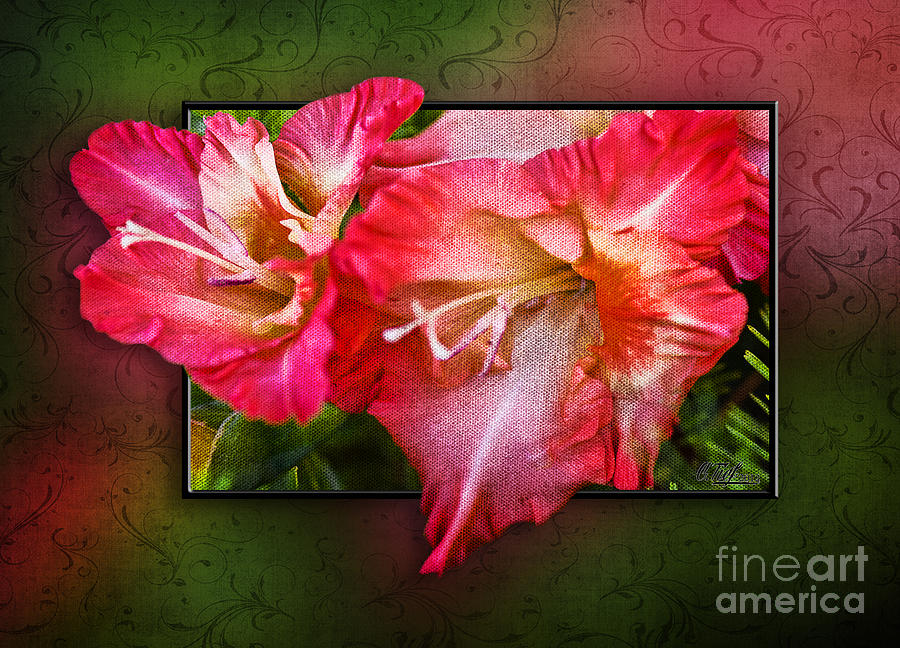 The genus Gladiolus contains about 260 species, of which 250 are native to sub-Saharan Africa, mostly South Africa. About 10 species are native to Eurasia. There are 160 species of Gladiolus endemic in southern Africa and 76 in tropical Africa. The flowers of unmodified wild species vary from very small to perhaps 40 mm across, and inflorescences bearing anything from one to several flowers. The spectacular giant flower spikes in commerce are the products of centuries of hybridisation, selection, and perhaps more drastic manipulation.

Gladioli are half-hardy in temperate climates. They grow from rounded, symmetrical corms, that are enveloped in several layers of brownish, fibrous tunics.

Their stems are generally unbranched, producing 1 to 9 narrow, sword-shaped, longitudinal grooved leaves, enclosed in a sheath. The lowest leaf is shortened to a cataphyll. The leaf blades can be plane or cruciform in cross section.

The flower spikes are large and one-sided, with secund, bisexual flowers, each subtended by 2 leathery, green bracts. The sepals and the petals are almost identical in appearance, and are termed tepals. They are united at their base into a tube-shaped structure. The dorsal tepal is the largest, arching over the three stamens. The outer three tepals are narrower. The perianth is funnel-shaped, with the stamens attached to its base. The style has three filiform, spoon-shaped branches, each expanding towards the apex.

The ovary is 3-locular with oblong or globose capsules, containing many, winged brown, longitudinally dehiscent seeds. In their center must be noticeable the specific pellet-like structure which is the real seed without the fine coat. In some seeds this feature is wrinkled with black color. These seeds are unable to germinate.

These flowers are variously colored, pink to reddish or light purple with white, contrasting markings, or white to cream or orange to red.

The South African species were originally pollinated by long-tongued anthro

This is great love the colours.

WOW this is fantastic. SE v/g+

Beautiful capture and presentation. Love it!!!