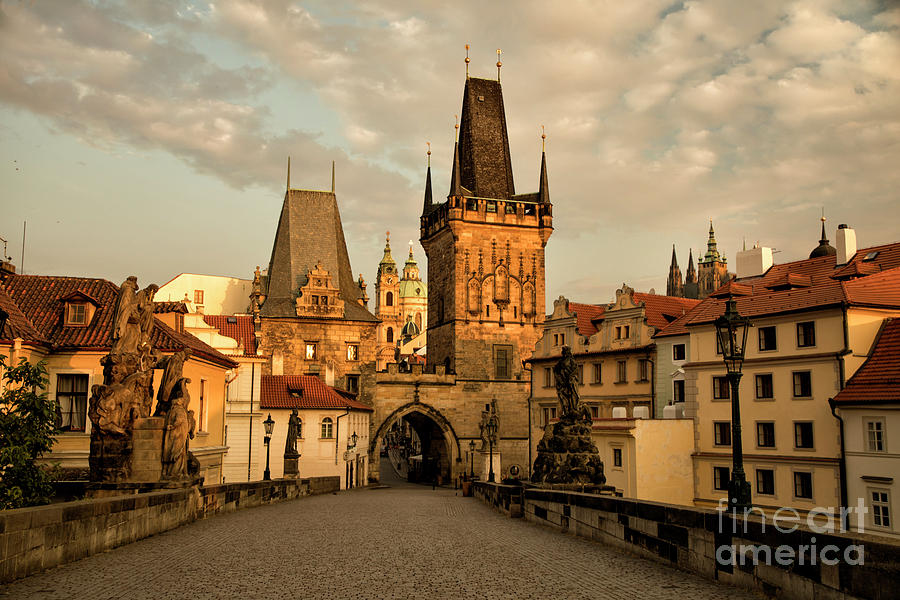 Charles Bridge is a historic bridge that crosses the Vltava river in Prague, Czech Republic. Its construction started in 1357 under the auspices of King Charles IV, and finished in the beginning of the 15th century. The bridge replaced the old Judith Bridge built 1158–1172 that had been badly damaged by a flood in 1342. This new bridge was originally called Stone Bridge (Kamenný most) or Prague Bridge (Pražský most) but has been "Charles Bridge" since 1870. As the only means of crossing the river Vltava (Moldau) until 1841, Charles Bridge was the most important connection between Prague Castle and the city's Old Town and adjacent areas. This "solid-land" connection made Prague important as a trade route between Eastern and Western Europe.

The bridge is 621 metres (2,037 ft) long and nearly 10 metres (33 ft) wide, following the example of the Stone Bridge in Regensburg, it was built as a bow bridge with 16 arches shielded by ice guards. It is protected by three bridge towers, [[Malá Strana Bridge Tower] two] of them on the Lesser Quarter side and one on the Old Town side, the Old Town Bridge Tower. The bridge is decorated by a continuous alley of 30 statues and statuaries, most of them baroque-style, originally erected around 1700 but now all replaced by replicas.

Prague is the capital and largest city in the Czech Republic, the 14th largest city in the European Union and the historical capital of Bohemia. Situated in the north-west of the country on the Vltava river, the city is home to about 1.3 million people, while its larger urban zone is estimated to have a population of 2.6 million. The city has a temperate climate, with warm summers and chilly winters.

Prague has been a political, cultural and economic centre of central Europe complete with a rich history. Founded during the Romanesque and flourishing by the Gothic, Renaissance and Baroque eras, Prague was the capital of the kingdom of Bohemia and the main residence of several Holy Roman Emperors, most notably of Charles IV (r. 1346–1378). It was an important city to the Habsburg Monarchy and its Austro-Hungarian Empire. The city played major roles in the Bohemian and Protestant Reformation, the Thirty Years' War and in 20th-century history as the capital of Czechoslovakia, during both World Wars and the post-war Communist era.

What a beautiful capture! Love the light! l/f/t/p/fb

Love this capture of the Charles Bridge! Beautiful light and perspective!

Fabulous! I would so love to visit. Wonderful image. L/F

Fabulous! I love your whole gallery!

Thank you Travel Pics for featuring my "Charles Bridge Sunrise" in the group Top Travel Pics!

Thank you Jan Mulherin for featuring my "Charles Bridge Sunrise II" in the group Art for Ever with You!

Congratulations!! This stunning image has been selected to be featured for the week in the “Art for Ever with You” Group Home Page. You are welcome to add a preview of this featured image to the group’s discussion post titled “2019 August: Stunning Group Featured Images and Thank-you’s” for a permanent display within the group, to share this achievement with others. Also feel free to post your feature on our group Facebook page: https://www.facebook.com/groups/296998814248643/ Thank you for your participation in the group! ~Jan (August 8, 2019)

Thank you Skyline Photos of America for featuring my "Charles Bridge Sunrise II" in the group The Weekenders!

Prague is a wonderful city and this image is beautiful, Mariola. L

This must have been a wonderful city to visit! FL

Mariola, this is one stunning capture. f/l

Beautiful capture of this iconic part of Prague!

This is a lovely scene Mariola! Sharing on Twitter.

This is wonderful Mariola! L/F

Thank you Nina Prommer for featuring my "Charles Bridge Sunrise II" in the group ART - It Is Good For You!

Thank you Frozen in Time Fine Art Photography for featuring my "Charles Bridge Sunrise II" in the group Your Very Best Photography!

Thank you Johanna Hurmerinta for featuring my "Charles Bridge Sunrise II" in the group Artist News!

Thank you Catherine Lott for featuring my "Charles Bridge Sunrise II" in the group The Broadcast Monkey!