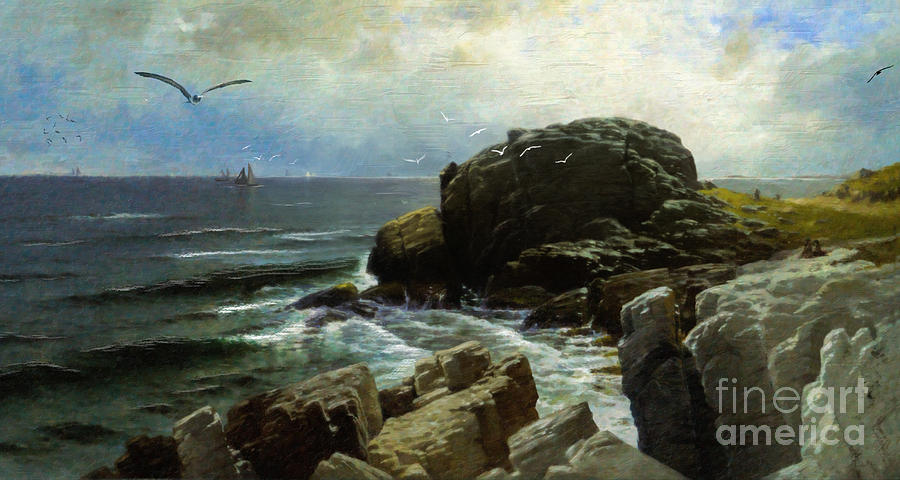 This digital oil painting is my interpretation of a work by Alfred Bricher completed in 1878 (and as with all Bricher's paintings this one is in the public domain). It is not a faithful reproduction. Bricher was one of the more prolific artists associated with White Mountain Art and the Hudson River School and with a painting technique called "luminism." Toward the end of his career, Bricher was considered one of finest maritime artists of his day.

According to Wikipedia, Marblehead is a coastal New England town located in Essex County, Massachusetts. Its population was 19,808 at the 2010 census. It is home to the Marblehead Neck Wildlife Sanctuary, Crocker Park, the Marblehead Lighthouse and Devereux Beach. Archibald Willard's famous painting The Spirit Of '76 currently resides in Abbot Hall. A town with roots in both commercial fishing and yachting, Marblehead is the birthplace of the American Navy and Marine Corps Aviation and a popular yachting destination.

Thank you to the following groups for featuring this painting:
BEST IMAGE PROMOTION - WILLIAM
ART WITH FLAIR - WILLIAM
PREMIUM FAA ARTISTS - DAN
OCEAN PHOTOGRAPHY AND ART - DIANNE
ART IT IS GOOD FOR YOU - NINA
I WISH I WAS THERE - DON
DIGITAL MAGIC - JEAN
IMAGES THAT EXCITE YOU - JOHN
OUT OF THE ORDINARY - LYRIC
PLEASING THE EYE - JEFF
T100 APPRECIATING QUALITY WORK FROM ALL MEDIUMS - NAVIN
DIGITAL ART AND FABULOUS FRACTALS - KIKI ART
SIGNATURE STYLE ART - SHARON


This 1.20 acre park, located off Ocean Avenue on Marblehead Neck, gets its name from the castle-like private home next to the park. Once known as "Great Head", Castle Rock was a lookout for arriving and departing fishing fleets and for pirate and enemy ships, both British and France. It offers spectacular views of the Atlantic Ocean with benches, fishing and off-shore sailing.

Dear Lianne, this is soo beautiful with great depth and epic sea scape! :)

Love the painterly feel and dramatic lighting of this. Wonderful work, Lianne! LF

Dear Lianne, this is gorgeous. The light here is stunning. I love the feeling that this work gives me.... I want to be there.... so peaceful and beautiful.... I could look at this all day. l/f

I would bet this is better than the original!!! Stunning. Lianne. Love everything about this. L/F

Lianne, I really enjoy your work! Your descriptions are well thought out and researched and simply fun to read! Take Care!

I am always awed by your beautiful and skillfully rendered images!

Love your work Lianne , always such a pleasure to visit your amazing Gallery!! Take care!! :-) lfv

This is so very beautiful, Lianne. You have so much talent!!! f/l

This work is so beautiful, Lianne! v f tw fb

Your interpretation of Alfred Bricher's work is incredibly lovely. He would be pleased and proud, I can imagine. What a stunning scene. The darks and lights complement this painting so well. This has a mysterious feeling to me. Love your work, Lianne. LF

Your work is always special and fantastic, just like the artist! Love this! v/f/ and I'll be back!

My most sincere thanks to Lyric, Jeff, Navin, Kiki Art and Sharon for featuring this painting in your marvelous groups - OUT OF THE ORDINARY, PLEASING THE EYE, T100 APPRECIATING QUALITY ARTWORK FROM ALL MEDIUMS, DIGITAL ART AND FABULOUS FRACTALS, and SIGNATURE STYLE ART. I can't tell you how honored I am.

How rich in color and texture, Lianne. truly superb! L/F

Beautiful digital special effects you have applied to Alfred Bricher's painting, Lianne! What a lovely seaside composition and work of art! L/F/T/fb/P