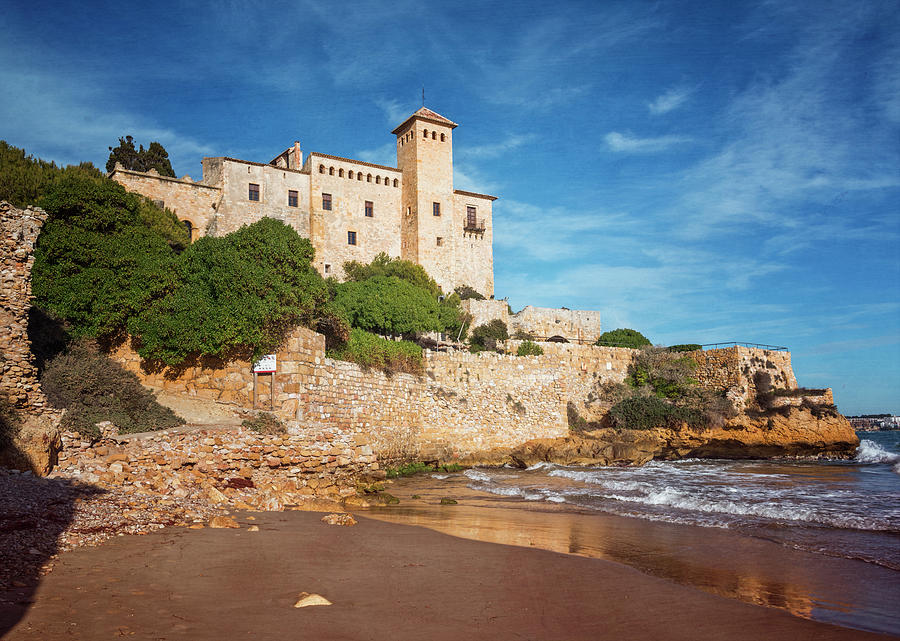 I was just a little proud of myself to have found Castell de Tamarit. I had seen photos of it and lucky for me I was watching out the window during the short train ride from Tarragona Spain to the tiny seaside town of Altafulla. Because when I got off the train there was no indication of where the castle might be! I walked from the train station to the beach and it still wasn't clear if I should go left or right along the beach. Being winter, there weren't too many people whom I could ask. Either way it was at least a mile walk to the headlands on either side and if I made the wrong guess, it would be 2 miles the other way. That's where I was lucky to have been watching out the train window. During the train ride I thought I glimpsed, just briefly, a shape that looked like the top of the tower. And from the orientation of the pictures I had seen, I tried figure which was the likeliest of the headlands. So I turned left. About half way down the beach I was rewarded with my first view of the historic seaside fortress! The first written records of this structure date from the 11th century. The castle contains both defensive and residential elements, including a prison, watchtowers and a Romanesque church, which, with its three naves, barrel-vault ceiling and straight chavet, is one of the purest and earliest examples of Romanesque architecture in Tarragona. From 1681 until the turn of the 20th century, when it was bought and restored by a private American collector, the castle belonged to the Archbishop of Tarragona and the Marquises of Tamarit. In the 19th century, the fishermen's village that once surrounded the castle was decimated by malarial fevers spread from the nearby marshlands. Tarragona city limits were extended to include the compound in 1950. Disappointingly, for tourists looking for some history it seems to be only a wedding destination, a business meeting place, and a restaurant.

A wonderful piece of history! L/F

Your images are so inspiring! This is gorgeous!

thank you Nader for the feature in the Exploration Photography group, 2/11/17

thank you Judy for the feature in the Usa Photographers Only group, 2/3/17