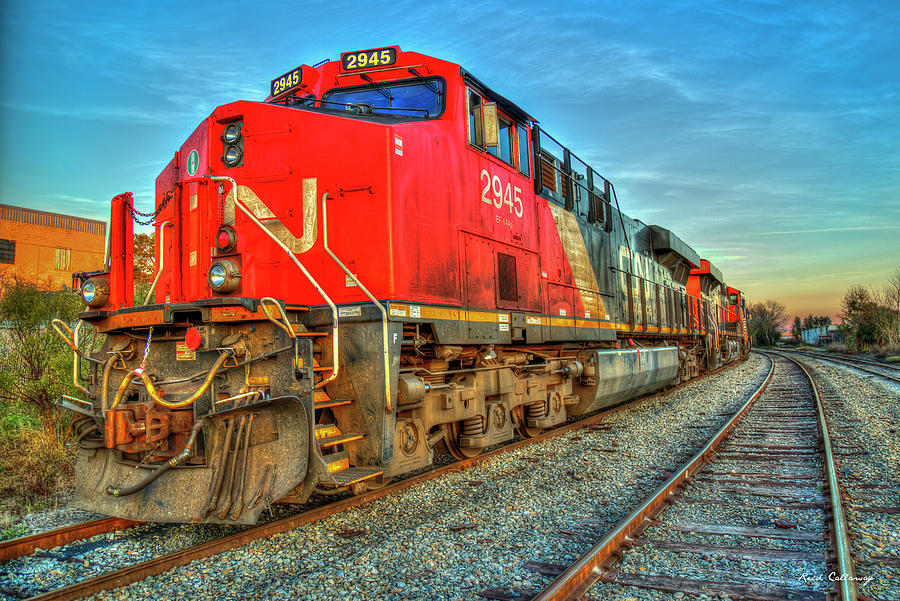 Five locomotives are lined up here in downtown Albany, Georgia. The two in front are CN (Canadian National) and further back are three Norfolk Southern locomotives. I wonder how many horsepower we are looking at here? Looks like they are loaded for bear, Right?

The Canadian National Railway Company (reporting mark CN) (French: Compagnie des chemins de fer nationaux du Canada) is a Canadian Class I freight railway headquartered in Montreal, Quebec that serves Canada and the Midwestern and Southern United States. CN's slogan is "North America's Railroad". CN is a public company with 24,000 employees. It had a market capitalization of 32 billion CAD in 2011. CN was government-owned, having been a Canadian Crown corporation from its founding to its privatization in 1995. Bill Gates was, in 2011, the largest single shareholder of CN stock.

CN is Canada's largest railway, in terms of both revenue and the physical size of its rail network, and is Canada's only transcontinental railway company, spanning Canada from the Atlantic coast in Nova Scotia to the Pacific coast in British Columbia. Its range once reached across the island of Newfoundland until 1988, when the Newfoundland Railway was abandoned.
Following CN's purchase of Illinois Central (IC) in 1998, and a number of smaller US railways, it also has extensive trackage in the central United States along the Mississippi River valley from the Great Lakes to the Gulf of Mexico. Today, CN owns about 20,400 route miles (32,831 km) of track in eight provinces (the only two not served by CN are Newfoundland & Labrador and Prince Edward Island), as well as a 70-mile (113 km) stretch of track (see Mackenzie Northern Railway) into the Northwest Territories to Hay River on the southern shore of Great Slave Lake; it is the northernmost rail line anywhere within the North American rail network outside of Alaska.
The railway was referred to as the Canadian National Railways (CNR) between 1918 and 1960, and as Canadian National/Canadien National (CN) from 1960 to the present.

The Norfolk Southern Railway is a Class I railroad in the United States, owned by the Norfolk Southern Corporation. With headquarters in Norfolk, Virginia, the company operates over 24,000 route miles in 22 eastern states, the District of Columbia, and has rights in Canada from Buffalo to Toronto and over the Albany to Montreal route. The most common commodity hauled on the railroad is coal from mines in Indiana, Kentucky, Pennsylvania, Tennessee, Virginia, and West Virginia. The railroad also offers the most extensive intermodal network in eastern North America.

Thank you Deni for admiring my artwork and for making this image one of your personal Favorites! 7/13/2020

Thank you to the buyer from Fresno California for the purchase of my image Canadian National Trains” printed on a Men’s T-Shirt! May this image be a Blessing to you and bring back fond memories for years to come! 7/21/2020

Thank you Frozen in Time Fine Art for featuring my artwork in our group..... Your Very Best Photograph! 4/23/2019

Thank you Jenny Revitz Soper for featuring my artwork in our Group.... No Place Like Home! 4/14/2019

CONGRATULATIONS! This outstanding piece has been FEATURED on the homepage of the FAA Artist Group No Place Like Home, 4/14/2019! Way to go! Please post it in the Group's Features discussion thread for posterity and/or any other thread that fits!