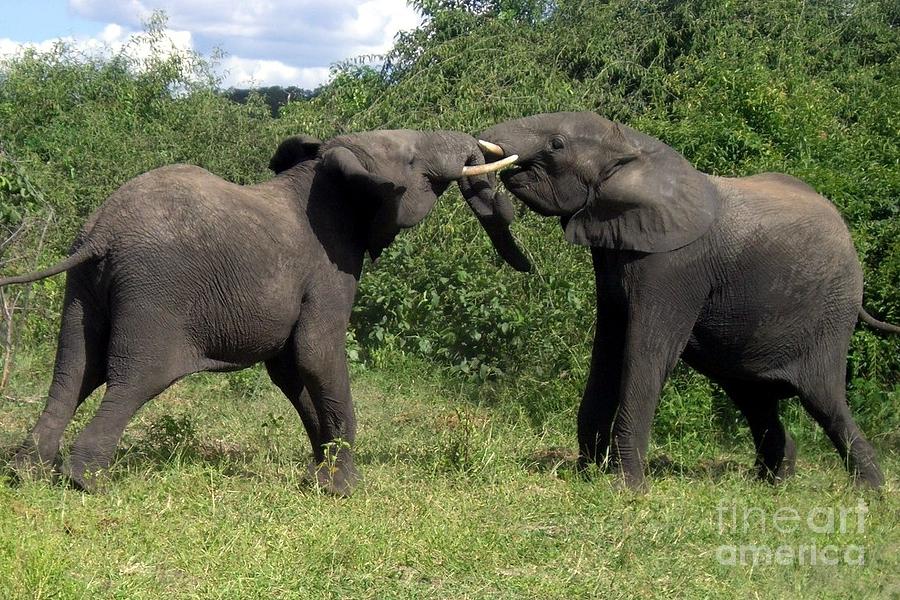 Have we now seen the elephants dance?
Actually, these big boys in South Africa are having another practice fight, as juveniles of many species do as part of their learning and development.

Elephants/ pachyderms are large mammals of the family Elephantidae and the order Proboscidea. Two species are African elephant (Loxodonta africana) and Asian elephant (Elephas maximus). These animals are fabled for their remarkable recall power, which researchers believe, is a big factor in survival. Matriarch elephants, in particular, hold a store of social knowledge that their families depend upon, according to research conducted on elephants at Amboseli National Park in Kenya.
Researchers discovered that elephant groups with a 55-year-old matriarch (elephants live around 50 to 60 years) were more likely to huddle in a defensive posture than those with a matriarch aged 35 when confronted by an unfamiliar elephant. Because they were aware that strangers were likely to start conflicts with the group and possibly harm calves. Other researchers, studying three herds of elephants during a severe 1993 drought at Tanzania's Tarangire National Park, found that they not only recognize one another but also recall routes to alternate food and water sources when their usual areas dry up.

Wow, Barbie, this is one amazing shot. f/l

What a fabulous capture, Barbie! And how great to be in Africa to get these shots. l/f

Thanks very much for the feature honor and the note!

Wow what a great moment to witness and photograph! L,F,Tw

I am a lucky lady twice, now. Witnessing the tussle and having your visit, compliments and support!!!

Excellent capture of wildlife partaking in their natural instincts! What an incredible moment to capture! Well done!

Thank you so much for sharing these guys!

That is a truly stunning scene with these mighty animals clashing into eachother. Beautiful capture Barbie!

Thanks! It was memorable!

Anna, thank you very much!

Thank you for visiting and complimenting. We were lucky to see this.

Thank you. We were lucky to be there!

One of your peers nominated this image in the 1000 views Groups nominated images by your fellow artist in the Special Features #6 promotion discussion. Please visit and pass on the love to another artist.

I am appreciative and have spread some love!

wonderful capture! Nominated for a feature in the 1000 Views group

Thank you so much for this compliment and support!

Amazing capture Barbie, must have been a thrill to see, L/F.

Yes it was, thank you!

Thanks for visiting Africa with me! :)

Thank you for this honor and support!

Thanks for visiting my Africa gallery!

Barbie, what a great capture1 F/L

What an amazing moment to witness, fabulous shot Barbie!

It was wonderful and we felt privileged to see them tussling like this! Thanks for visiting Africa with me!

Best way to show Africa is through its animals. This is magnificent. f/l/p/t/g+

Thank you for your visit, nice comments and much appreciated sharing!

great (and lucky you to be there) shot ! tweeted !

Thank you for your visit, nice comments and tweet!

Congratulations ...This wonderful artwork has been featured in " 500 Views Share Group " ...Shared...Beth

Wonderful! Thank you so much for the honor of your much-appreciated feature support!

Great action photograph of two young elephants sparring with one another in their native habitat. The colors, exposure, DOF, and composition are beautiful! F/L

Thank you so much. I appreciate your wonderful note!

fantastic Wildlife shot Barbie, i love it v/f and tweet

Thank you so much! I am glad you enjoyed it! Share it with the kids!

Barbie, great action capture of the moment, well focused and framed with a good background! Congratulations!

Thank you very very much!

What a wonderful experience that must have been! Posted in Favoritism Fun discussion in ALL Starz!

Thank you very very much!

Love the suspense you captured here, Barbie ! l/f/shared. Happy New Year to you !

Thank you so much for the nice wishes and note!

Fabulous wildlife capture Barbie, I would love to go here one day!...F/L

Thanks very much Donna for your visit and support. Happy trails! :)

Thank you very much for your nice compliments and much appreciated support!

A magnificent capture. Your Africa gallery is wonderful! f/l/p/t/G+

Wow, how nice of you! Thank you very much, and all best wishes!

Yes, thank you for your visit andcomment!

Thanks for your visit and compliment!

Thanks for your visit and compliment, Ruth!

We were amazed to see it and I am so happy that you enjoyed it. Thank you very very much for your support!

Thank you so much. I am so honored that one of the great living painters of Europe appreciates my humble travel photos!

I love elephants . This capture is so moving . L/F

So glad you enjoyed it, thanks!

I was so lucky to see this! Thank you!

Thanks so much for the visit, comment and much-appreciated feature honor!!

I just had to see this again.

How nice of you to visit again, Constance!

Thank you for your compliments and support, Constance!

Thank you very much, Sandra!