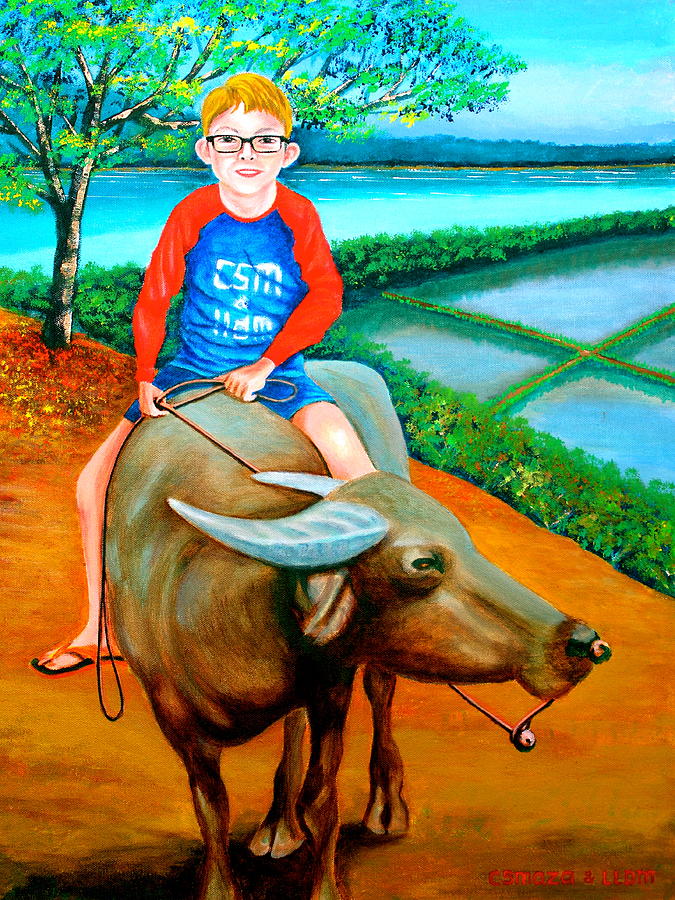 A caucasian boy named Isaiah, from Texas, went to the Philippines to spend a vacation with his family. He was visiting the Philippines and his relatives there for the first time. He had a wonderful time, playing with his cousins and meeting new friends.

This painting shows Isaiah riding a carabao. He really had a lot of fun back there.

Carabaos are used for farming and for pulling carts in rural villages in the Philippines. They are also a good source of meat, milk, and hide. Carabao hide was once used extensively to create a variety of products, which include the armor of pre-colonial Filipino warriors.

"The carabao is considered a symbol of Guam. In the early 1960s, carabao races were a popular sport in the island, especially during fiestas. Today, carabaos are a part of the popular culture. They are often brought to carnivals or other festivities, and are used as a popular ride for children." (Source: Wikipedia)

Thanks for the featured, Self Taught Artist.

Thank you for buying cards.

Thanks for the featured, All Seasons Landscape.

Thanks for buying cards.

Thanks for featuring our painting, Memories and Nostalgia.

Thanks for buying throw pillows cover.

Thanks T100 Colorful Art for featuring our painting.

Love this Lorna! He looks so out of place yet comfortable riding it! l/f

Thank you so much Mr Jim

Love this! Great mood and colors and composition! Fabulous! v/f/pin

Love the bright colors in this beautiful painting, Lorna! L/F

I love this work. What a truly wonderful moment you've captured.

Thanks for the comment, i really appreciate a lot.

congrats on your wonderful sale!

Thank you so much Jim.

Thanks for the featured on your homepage "Asian Artists".

This a great painting. The description is very interesting.

Ah this is a heartwarming painting, Lorna! It makes me smile! L

Thanks for the visit and liking Sandl.

Congratulations, your work is featured on the homepage of "Created by my Hands".

Thank you so much David.