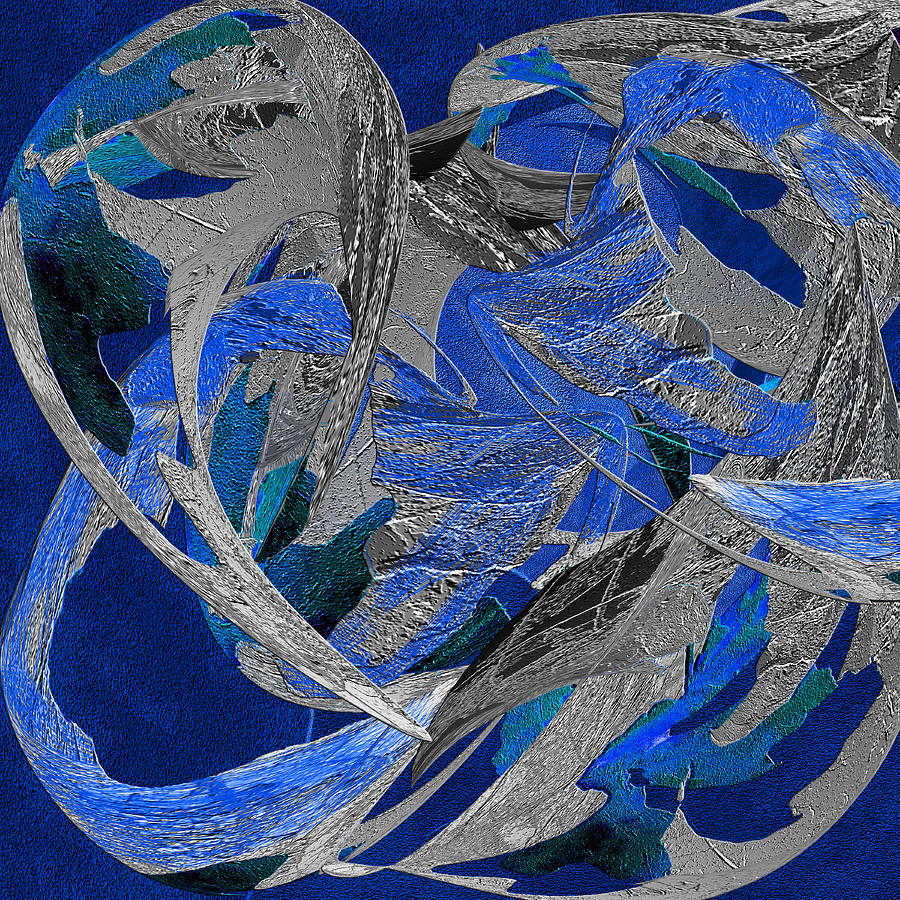 A wonderful abstract filled with waving dancing metallic silvery and blue movement. The Moon is considered the intuitive, silver metal, the metal of women. It inspires us, and under its light we are free to dance in the swirling swooning rhythm of our unconscious dream state. In this state we act out all the emotions, which is key to the color blue.

Blue is the color of water, it evokes the ancient Sanskrit sound, Leem, which can lift us from an emotional issue and transform us to freely dance knowing all that Spirit has to offer will embrace us and we will come through unharmed.

So I offer you Blue Moon Dance... may you let go of all the cares, woes and the stress that holds you back, and allow Leem, the element of water wash you clean as you dance under the light of the Moon.

Abstract art uses a visual language of form, color and line to create a composition which may exist with a degree of independence from visual references in the world. Western art had been, from the Renaissance up to the middle of the 19th century, underpinned by the logic of perspective and an attempt to reproduce an illusion of visible reality. The arts of cultures other than the European had become accessible and showed alternative ways of describing visual experience to the artist. By the end of the 19th century many artists felt a need to create a new kind of art which would encompass the fundamental changes taking place in technology, science and philosophy. The sources from which individual artists drew their theoretical arguments were diverse, and reflected the social and intellectual preoccupations in all areas of Western culture at that time.

Abstract art, nonfigurative art, nonobjective art, and nonrepresentational art are loosely related terms. They are similar, but perhaps not of identical meaning.
Abstraction indicates a departure from reality in depiction of imagery in art. This departure from accurate representation can be slight, partial, or complete. Abstraction exists along a continuum. Even art that aims for verisimilitude of the highest degree can be said to be abstract, at least theoretically, since perfect representation is likely to be exceedingly elusive. Artwork which takes liberties, altering for instance color and form in ways that are conspicuous, can be said to be partially abstract. Total abstraction bears no trace of any reference to anything recognizable. In geometric abstraction, for instance, one is unlikely to find references to naturalistic entities. Figurative art and total abstraction are almost mutually exclusive. But figurative and representational (or realistic) art often contains partial abstraction.

Abstraction in early art and many cultures
Main articles: Prehistoric art and Eastern art history
Much of the art of earlier cultures � signs and marks on pottery, textiles, and inscriptions and paintings on rock � were simple, geometric and linear forms which might have had a symbolic or decorative purpose. It is at this level of visual meaning that abstract art communicates. One can enjoy the beauty of Chinese calligraphy or Islamic calligraphy without being able to read it.
19th century[edit]
Main articles: Romanticism, Impressionism, Post-Impressionism and Expressionism
Three art movements which contributed to the development of abstract art were Romanticism, Impressionism and Expressionism. Artistic independence for artists was advanced during the 19th century. Patronage from the church diminished and private patronage from the public became more capable of providing a livelihood for artists.[citation needed]

James McNeill Whistler, Nocturne in Black and Gold: The Falling Rocket (1874), Detroit Institute of Arts. A near abstraction, in 1877 Whistler sued the art critic John Ruskin for libel after the critic condemned this painting. Ruskin accused Whistler of "ask[ing] two hundred guineas for throwing a pot of paint in the public's face." [6][7]
Early intimations of a new art had been made by James McNeill Whistler who, in his painting Nocturne in Black and Gold: The falling Rocket, (1872), placed greater emphasis on visual sensation than the depiction of objects. An objective interest in what is seen, can be discerned from the paintings of John Constable, J M W Turner, Camille Corot and from them to the Impressionists who continued the plein air painting of the Barbizon school. Paul C�zanne had begun as an Impressionist but his aim - to make a logical construction of reality based on a view from a single point,[8] with modulated colour in flat areas - became the basis of a new visual art, later to be developed into Cubism by Georges Braque and Pablo Picasso.
Expressionist painters explored the bold use of paint surface, drawing distortions and exaggerations, and intense color. Expressionists produced emotionally charged paintings that were reactions to and perceptions of contemporary experience; and reactions to Impressionism and other more conservative directions of late 19th-century painting. The Expressionists drastically changed the emphasis on subject matter in favor of the portrayal of psychological states of being. Although artists like Edvard Munch and James Ensor drew influences principally from the work of the Post-Impressionists they were instrumental to the advent of abstraction in the 20th century.

Henri Matisse, The Yellow Curtain, 1915. With his Fauvist color and drawing Matisse comes very close to pure abstraction.
Additionally in the late 19th century in Eastern Europe mysticism and early modernist religious philosophy as expressed by theosophist Mme. Blavatsky had a profound impact on pioneer geometric artists like Wassily Kandinsky, and Hilma af Klint. The mystical teaching of Georges Gurdjieff and P.D. Ouspensky also had an important influence on the early formations of the geometric abstract styles of Piet Mondrian and his colleagues in the early 20th century.

20th century[edit]
Main articles: Western painting, Fauvism and Cubism
Post Impressionism as practiced by Paul Gauguin, Georges Seurat, Vincent van Gogh and Paul C�zanne had an enormous impact on 20th-century art and led to the advent of 20th-century abstraction. The heritage of painters like Van Gogh, C�zanne, Gauguin, and Seurat was essential for the development of modern art. At the beginning of the 20th century Henri Matisse and several other young artists including the pre-cubist Georges Braque, Andr� Derain, Raoul Dufy and Maurice de Vlaminck revolutionized the Paris art world with "wild", multi-colored, expressive, landscapes and figure paintings that the critics called Fauvism. With his expressive use of color and his free and imaginative drawing Henri Matisse comes very close to pure abstraction in French Window at Collioure, (1914), View of Notre-Dame, (1914), and The Yellow Curtain from 1915. The raw language of color as developed by the Fauves directly influenced another pioneer of abstraction Wassily Kandinsky (see illustration).
Although Cubism ultimately depends upon subject matter, it became, along with Fauvism, the art movement that directly opened the door to abstraction in the 20th century. Pablo Picasso made his first cubist paintings based on C�zanne's idea that all depiction of nature can be reduced to three solids: cube, sphere and cone. With the painting Les Demoiselles d'Avignon 1907, Picasso dramatically created a new and radical picture depicting a raw and primitive brothel scene with five prostitutes, violently painted women, reminiscent of African tribal masks and his own new Cubist inventions. Analytic cubism was jointly developed by Pablo Picasso and Georges Braque, from about 1908 through 1912. Analytic cubism, the first clear manifestation of cubism, was followed by Synthetic cubism, practised by Braque, Picasso, Fernand L�ger, Juan Gris, Albert Gleizes, Marcel Duchamp and countless other artists into the 1920s. Synthetic cubism is characterized by the introduction of different textures, surfaces, collage elements, papier coll� and a large variety of merged subject matter. The collage artists like Kurt Schwitters and Man Ray and others taking the clue from Cubism were instrumental to the development of the movement called Dada.

My dear friends, I wait for all of you in my contest "The best images' Collection".

Thanks for the heads up, Michael, I will go there now. best to you in all things, Michele

Congratulations, your art work is featured on the homepage of "PICTURES FOR PRESENT" group!

This is another terrific abstract. Love it Michele.

Lovely, I felt really happy reading your description and certainly felt like dancing under the light of the moon. F/L

Thank you, Linda.. I think it really does help to offer my view on any abstract I create, it gives insight into the piece and as I always pray, it will uplift the viewer and in this case encourage them to dance!

The description is a must read. Yes, let's dance under the Moon!!! -_-

Yes, let's we are now under a harvest moon.. perfect for the dance!

Thank you, truly an honor... love the wolves, the crows and all life!

I can see the graceful movements of a dancer in this piece, Michele. I love your colors here.. I can see a woman's full skirts swirling to the rhythm of the music. Very elegant work!

Thank you, Karen, you are an early bird... I have yet to go to sleep... headed there now.. hugs