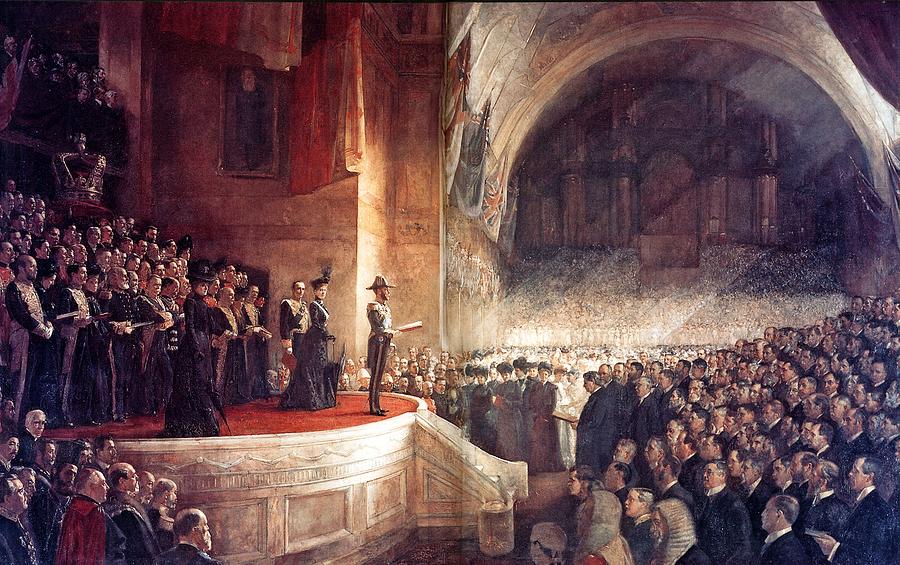 This is a reproduction of Tom Roberts' "The Openning of the First Parliament of the Commonwealth of Australia" of 1903. It is known in Australia as "The Big Picture" and measures almost 120 inches wide by 200 1/2 inches high. It has been on loan from the Royal Collection to the Parliament of Australia since 1957 and is on display in Parliament House, Canberra. This projec was commissoined by a private consortium as a gift to the nation. Though Roberts was not appointed until after the ceremony he nevertheless attended and took various photographs and sketches on speculation. The picture contains 269 portraits and most people are wearing black in commemoration of the recent death of Queen Victoria. The painting was finished in London, displayed in Paris and then presented to Edward VII by the Australian government in 1904. In 1957 Robert Menzies, prime minister of Australia, requested the painting which the queen gave, the painting arriving in Australia in 1958. It toured the Australian states and in 1969 was stored. In 1980 the painting was restored in time for the openning of its new home by the Queen, in the High Court of Australia. In 1988 the painting was moved to Parliament House in Canberra into a space which was specifically designed for it.