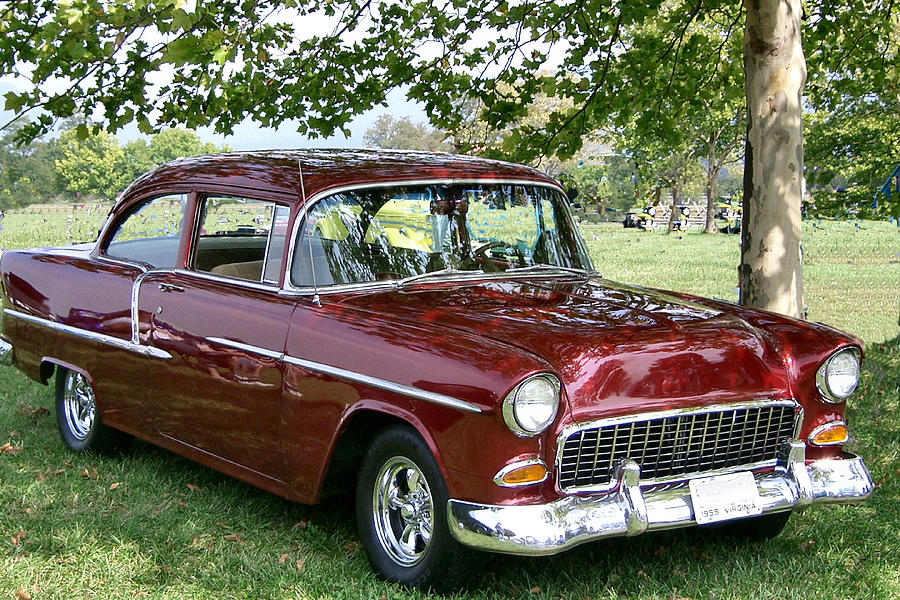 The artist had one of them with a 265, bored out .0060 (as far as it could be taken without milling into the water jackets) that produced close to 300 HP when outfitted with a Duntov cam, a Carter AFB 4-barrel (storm-drain) carb, solid lifters, straight pipes (hollow drive shafts welded to the headers) and double valve springs (Lincoln inside of Chevy). With its 3-speed manual transmission and a Powerglide (3.70) rear end it would do 66mph in 1st, 99 in 2nd and, well... Not much off the line, but with new valve springs it turned low 14s to mid 13s on the paced-off 1/4 out on State Route 99.

Anyway, they were spacious for a 2-door with plenty of room on both front and back bench seats, so they became sort of a super business coupe, a darling of the traveling salesmen.

Light and nimble (for its time), it was a favorite of the milder hot-rod set, and saw quite a bit of action on mid-west 3/8 mile oval tracks, and were bobbed (smooth nose) and lowered (rear end only). by rural drag racers.

Afterthoughts:
1. Woodward Avenue saw them by the dozens in the early 60s.
2. The latches on the door side were designed to open beer bottles
3. If Falfa had been driving one, instead of the heavier 4-door, he might have beaten Milner

Outstanding composition, lighting, shading, color and artwork! F/L voted for this piece in the contest EVERY ONE CAN GET THIS RIGHT - POST WHAT YOU WANT-...

Beautiful image of a classic!

Congratulations Lin, your work is Featured in "All Automotive Artworks" I invite you to place it in the group's "2018 Featured Image Archive" Discussion!! L/Tweet