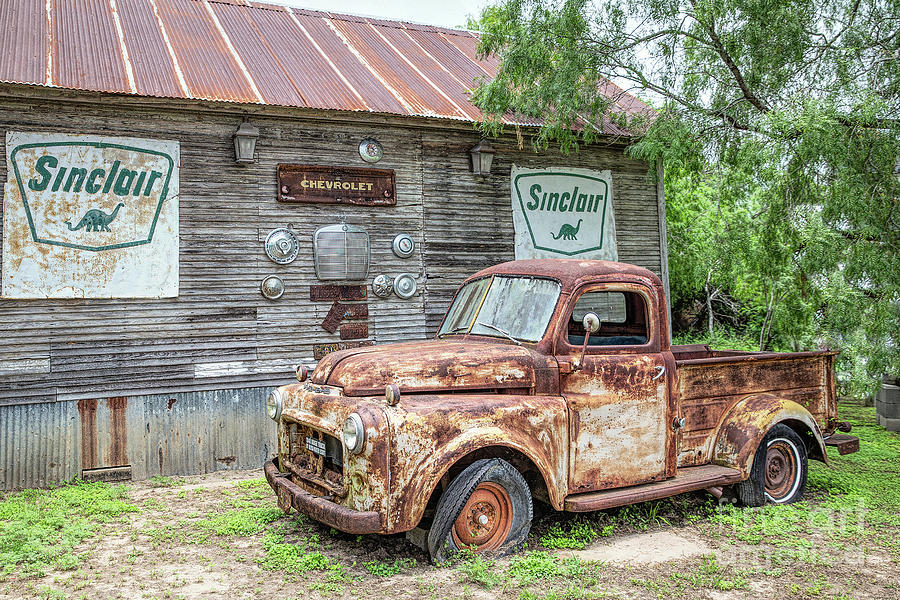 1940 Dodge Truck by Lynn Sprowl.
This old truck sits beside the Holm RR Depot in Oakville, Tx.
Built in the early 1900's it served local farmers shipping their cotton crops and during WWI the depot served as a receiving station for soldiers.
Oakville is at the intersection of Interstate Highway 37 and Farm Road 1358, nine miles north of George West in north central Live Oak County. After the Texas Revolution Oakville was a station on the stage line from San Antonio to Corpus Christi. At that time the community was referred to as "on the Sulphur" because it was on Sulphur Creek. It was also called Puenta de la Piedra ("Rock Bridge") by Spanish gold seekers, because two miles east on the Nueces River the San Antonio-Brownsville road crossed a natural rock bridge. Oakville became county seat after Thomas Wilson offered 640 acres for a townsite; residents accepted the location on September 8, 1856. The name was taken by the court from a newspaper advertisement of business lots. Oakville had the county's first post office, established in 1857, and the first Sunday school. The Oakville Baptist Church, constructed in 1856, had 128 members by 1857. Oakville and the region became a "hotbed of lawlessness" during the Civil War and remained so until Capt. Leander H. McNelly and his rangers cleared out the outlaws in 1876. Historian Walter Prescott Webb described Oakville as "a hard country where civil authorities were helpless and took no notice of any outrage." As the county seat, Oakville grew into a thriving town that shipped cattle, horses, cotton, and wool, with a dozen or more stores, two hotels, a livery stable, a steam gristmill and cotton gin, a school, and two churches. The population of Oakville reached 400 in 1885, fell to 320 in 1892, then rose to a maximum of 450 in 1914. The town's decline began in 1913, when the San Antonio, Uvalde and Gulf Railroad was built to the west. George West became the county seat in 1919 when its founder offered $75,000 to build a new courthouse there

The Trucks Old Abandoned and Rusty Group is honored that you chose to submit your work to the group and we are proud to feature your magnificent image on the Homepage in the Featured Images.

Thank you so much, Steven.

Thank you for the feature, Jeff.