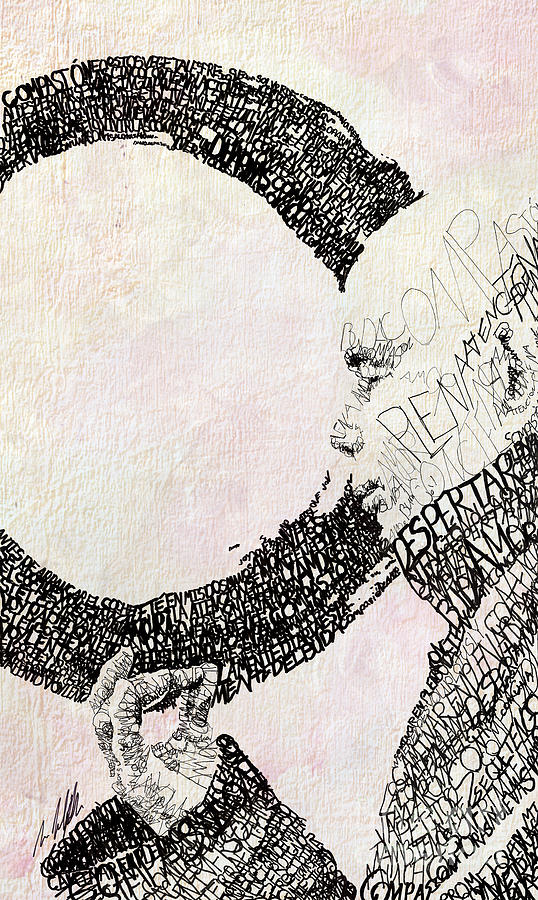 Thich Nhat Han is a Vietnamese Zen Master. He joined the monkshood at a young age and lived through the Vietnam war as a monk. During this time he made it his mission to try and help those suffering through times of war by founding the school of youth Social Service, that helped rebuild bombed homes, set up schools, and medical centers.
!
 
In 1982 he founded the Plum Village in France, which is a buddhist community where he continues to try and ease suffering for families in vietnams and throughout the third world where he still resides today.
!Thich Nhat Hanh was a Vietnamese refugee who, instead of becoming bitter after being sent into exile, set up foundations to help other refugees that were too poor to buy food and clothes. He tried to teach people to be mindful of the natural world through poetry and lectures. Even though things were bad, he did his best to remain positive. I made this portrait using his poetry and teachings because I thought that doing so would create more understanding of who this man is.
!

one of my favorite wordart

Congratulations on your recent sale! L/F

Congrats on your sale. Inspiring Art

Congratulation on sale announcement and Great.

Interesting artwork and very interesting story to go with it! Well done!

Not sure it was submitted correctly, Michael. I'll e-mail you but I clicked on the link and came to this.. I just couldn't see the image until I got here. Extremely beautiful..ao very creative.. Love your work.. Will e-mail you.. I too am a member of "Appreciating Works From all Mediums" We so welcome this work

Thank you Maria for all your help!