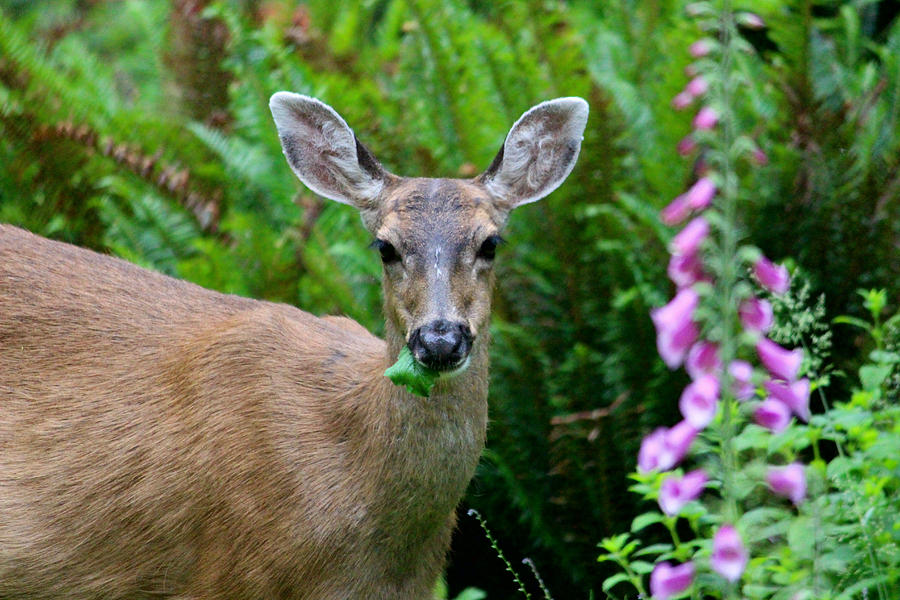 Here is one of the deer that was born in this yard. She looks very pregnant. I have lots of variety of mint all over the yard. (I used to have many beautiful flowers, and roses) those are long gone. They don't eat the Foxglove. That's why it is in the photo still. This is a Black Tailed Deer that grow up and live and grow here. Some facts about these deer. Here's some of that info you might want to know about.
Deer are among the most familiar animals of Washington, and in many places they are the largest wildlife that people encounter. Their aesthetic beauty is appreciated and admired, although their fondness for garden and landscape plants tries some peoples’ patience.
Two species and four subspecies of deer occur in the state
Rocky Mountain mule deer (Odocoileus hemionus hemionus,), or mule deer, inhabit areas east of the Cascades in Washington, preferring open forests and sagebrush meadows.During summer, mule deer are tan to light brown; during winter, they are a salt-and-pepper gray. They have large, dark-edged ears, from whence they derive their name. The 7 to 8 inch tail of a mule deer is white, except for a black tip. Mule deer are the largest deer in Washington. Adult buck (males) weigh up to 250 pounds; adult doe (females) weigh 120 to 170 pounds.
Columbian black-tailed deer (Odocoileus hemionus columbianus) are our most common deer subspecies. They occur from the crest of the Cascades west to the ocean, preferring brushy, logged lands and coniferous forests. Many of the physical characteristics of black-tailed deer are similar to those of the larger mule deer. The tail is broader and the backside of the tail is covered with dark brown hair that grades to black near the tip. When alarmed or fleeing from danger, the tail may be raised, displaying the broad, white underside. Adult black-tailed deer bucks weigh 140 to 200 pounds.•Deer eat a wide variety of plants, but their main food item is browse—the growing tips of trees and shrubs. In late winter and early spring, deer eat grass, clover, and other herbaceous plants •Deer also eat fruit, nuts, acorns, fungi, lichens, and farm and garden crops if available.
•For their first few weeks of life, fawns thrive on milk, which is more than twice as rich in total solids as the best cow milk.
•Deer eat rapidly and, being ruminants, initially chew their food only enough to swallow it. This food is stored in a stomach called the “rumen.” From there it is regurgitated, then re-chewed before being swallowed again, entering a second stomach where digestion begins. From there it is passed into a third and then a fourth stomach, finally entering the intestine.
Shelter and Range Needs
•Deer are sometimes referred to as “edge” species, meaning they thrive at the interface of openings and cover patches. This allows deer to feed in productive openings while being close to escape cover.
•Many wooded suburban environments, such as parks, greenbelts, golf courses, and roadsides, meet the needs of deer.
•Mule deer can move long distances during spring and fall migrations to avoid mountain snow. Mule deer summering in the Cascades migrate as far as 80 miles to reach adequate winter range.
•Black-tailed and white-tailed deer normally reside within a ˝ to 3 square-mile area; in mountainous locations, they move to lower elevations for the winter.
hybrids are not common, but are occasionally seen where both species occur in close proximity.

Excellent Photo ! Almost rivals the cuteness of your splendid raccoons - and your avatar ! :-)

Ohhh Kym, she is beautiful, but it must be hard to see all of your flowers disappear! Guess more Foxgloves :) F/L

Great capture of that deer having it's lunch in the middle of its green paradise... L!

Beautiful deer capture in mid-munch! Maybe she is eating the soothing mint leaves to ease her morning sickness? Enjoyed your deer facts with this Momma Deer capture, Kym! v/f

So he got thru the blueberries and found the flowers! Beautiful capture! v/f

Congratulations! This image has been featured in 'All Natural Beauty of this World' !

I am amazed how she poses foryou! Great shot! F/L

I can see you're a lover of animals from all your photos of them. You capture the clarity of the deer very well. Good work, Kym!

Wonderful capture and animal! Happy early 4th of July to you too!

I really love this photo, it;s as if he is saying "don't think I don't see you".

This is beautiful Kym

Lovely scene and capture, I love mint too! :) LF

Oh what a great close up of the deer Kym. Hope you are doing well. f/l Ruth

What a wonderful capture with very good detail Kym!! v/f/t

I love this Kym. You have captured this perfectly and the colors of the foxglove make it perfect.

Haha...I'm glad they don't like the Foxglove flower! Nice capture...L.F.

what an adorable shot

I can't believe what's in your back yard. Amazing shot. You are so intune with these creatures!

Kym, Another Gorgeous Capture!...I love how the animals look at you!...ft.vt

What a great shot!

Hi Kym~~I'm very familiar with this- the deer enjoy being in our yard, as well- we did fence the vegetable garden, but they have the run of the rest of the property!! A beautiful close-up!! F&L!!