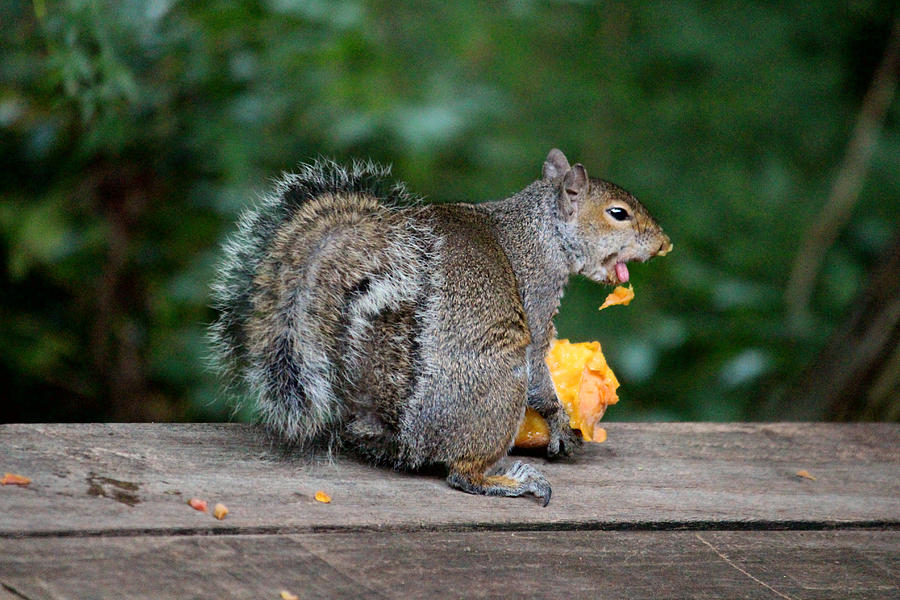 This is the big bad dreaded Grey Squirrel, They arrived in our area about 3 years ago. Until then we only had the native, smaller and cuter Douglas Squirrel. This Grey Squirrel fights for territory with the small brown Douglas squirrel. He obviously got this peach off my peach tree, and I realize not even these animals like the feeling of peach fuzz on their tongues. Hehe. The Western gray squirrel (Sciurus griseus,) is the largest tree squirrel in Washington, ranging from 18 to 24 inches in length. It has gray upper parts, a creamy undercoat, and its tail is long and bushy with white edges. This species is found in low-elevation oak and conifer woods in parts of western and central Washington. Mr. Grey is always fighting the my favorite brown Douglas Squirrel. Today Mr. Grey Squirrel managed to win the peach. This peach is probably bigger than the "Mr. Bud's" entire body.. I don't think he was willing to share either.. Bummer

Congratulations on your feature our 'Funny Animal Photography' group!

Congratulations Your work was chosen BY Four Judges to be Featured as a PHOTO OF THE WEEK from over 4,457+ images submitted. Thank your for your participation...

Super capture of this common but quick animal!! Cute and nice timing! L/F

Whenever I need a smile, I come visit your critter cam collection and this is one of my absolute favorites. Sharing this in the discussion threads of Amazing Art and Artists... Happy New Year Kym..thank you so much for all your support and encouragement.

Perfect timing for this funny shot, Kym! You have made my morning once again! L/F

ha ha funny. They are not that bad or next time try "Fuzzy Peach" candy chews. L/F

OMG you made me laugh! So cute capture! You are the animal photography specialist! The cutst pictures. L/F

Wonderful timing to get this funny capture!! v/f/t

This is a terrific shot. Well done capturing the tongue like that!

This so cute and love your description! Adorable! l/f

I must say I'm enjoying your squirrel almost as much as I do your raccoons Kym. What a fabulous expression you've caught here. And your titles continue to tell a story! Love this. F/L T

LOL Kym:) Made me laugh as usual:)SO nice to be back and to see you here again, active and attractive;) f/v PS-I didnt have a wig when I found the castle..too bad, because the prince was not interested;)

Kym I hope you realize you have a gift that you share so readily with the world. First of all, you have an endless supply of animals who seemingly perform on command for your camera...but the gift you have is humor...the ability to see a situation in nature, capture it and transform it into a moment captured that never ceases to bring a smile to my face. Thank you!

Ha! This one made me laugh out loud. Nice one, Kym!

oh our kym is back in action with her troup of performing squirrels! yeaaa:)too funny,love that tongue sticking out:) l/f

Oh my gosh I could almost hear the "Yuck!" What a face!! Not surprised at all since it came from you dear Kym!!! :))) Hope this post finds you smiling! :)) fv

Funny! I know just how he feels! L/F

This is so joyful.Superb work, beautiful portrait!!!! L / F

Good Morning Kym, thank you for a big smile to start my day, love this capture and such a cute title!...fav/tweet/like

LOL. Cute! Congratulations, Your beautiful Art work has been Featured in "Fuzzy, Warm, and Soft!"

I just LOVE all your animal shots! Amazing captures!!

STEFANO SENISE, Happy Tuesday to you! Thank you for the feature of my photo YUK, I HATE PEACH FUZZ in your group 10 PLUS. I love this group. I know always check to make sure there are at least 10 likes!

Love the title... go well together! Thanks for the smile! :-)

CHUCK HICKS, Thank you for being the first to feature my photo YUK I HATE PEACH FUZZ in your fun and interesting group AAA IMAGES.

Great photo! The expression on his face is priceless. Love the background and detail. Maybe do a little research and you might find some way to help them coexist more peacefully. I like squirrels but just like you I wouldn't want a big one beating up a little one.

This is hilarious Kym! What a great capture! Love this! l/f

OMG! Agree with Michele! What a fantastic and FUN moment capture! Kym I love your talent and fantastic addition to words and story telling you add! Amazingly Beautiful!!

OMG, this picture is so funny and so wonderful...it will make anyone smile!! Love it! Love all your creature shots, Kym..you are amazing!